Arnold Schwarzenegger On Donald Trump: “I Wanted To Smash His Face Into The Table” 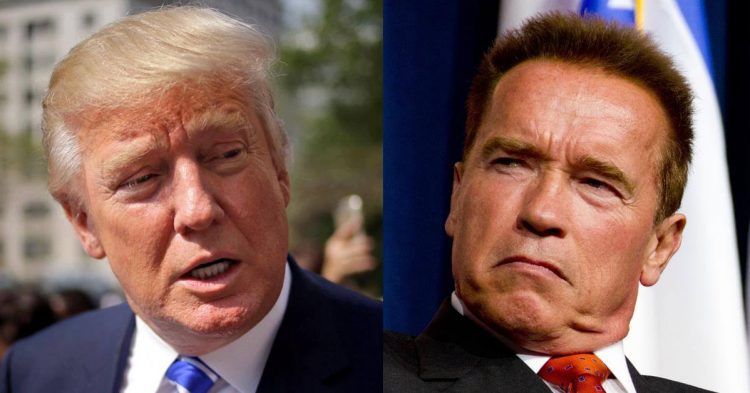 Since Arnold Schwarzenegger succeeded Donald Trump as the host of Celebrity Apprentice, there’s been no love lost between the former governor of California and the current president of the United States.

In a new interview with Men’s Journal, Schwarzenegger joked that he’d like to introduce Trump’s face to a table.

“I said, ‘Let’s sit on it for an hour,’” Schwarzenegger said. “I called my assistant and said, ‘I think what we really should do is request a meeting and go back to New York. And then we just smash his face into the table. And then I think we can’t do that either. I think I have to be above all of that and put him on the spot.’ ”

Schwarzenegger then quickly clarified he was joking, saying: “I think we can’t do that, either. I think I have to be above all of that and put him on the spot.”

The two have exchanged heated words in recent weeks, with Trump notably criticizing the former Governor of California for the drop in ratings suffered by The Apprentice – which Schwarzenegger took over as the host of following Trump’s foray into politics. Schwarzenegger responded on Thursday (February 2) with an Instagram video that reminded the President of his new role: “Hey Donald, I have a great idea – why don’t we switch jobs? And then people can finally sleep comfortably again.”

After Trump tweeted that Schwarzenegger “did a really bad job as Governor of California and even worse on the Apprentice,”

Yes, Arnold Schwarzenegger did a really bad job as Governor of California and even worse on the Apprentice…but at least he tried hard!

Schwarzenegger tweeted back at Trump with a link to a news story from 2006 detailing the release of Schwarzenegger’s tax returns as part of his gubernatorial re-election bid.

Sharing the link was a direct dig at the new president, who has been dogged by criticism of his decision to withhold his tax returns and details of his financial obligations since he began his bid for the Presidency. He was the only major party nominee for president in over 40 years who has refused to make such disclosures.

Trump’s dig at the NBC reality show’s ratings during Thursday morning’s National Prayer Breakfast made national news given the normally serious tone of the annual event.

“When I ran for president, I had to leave the show. They hired a big, big movie star Arnold Schwarzenegger to take my place and we know how that turned out. The ratings went right down the tubes,” Trump said Thursday.