Age is just a number! Toshisuke Kanazawa has no plans of slowing down and is already targeting a return 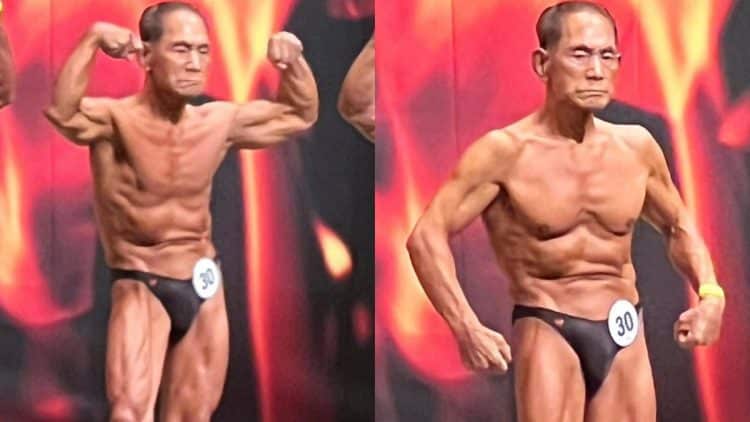 Father Time is undefeated, but there is one bodybuilder who’s determined to change that. Japanese bodybuilder Toshisuke Kanazawa defied all odds when he participated in a bodybuilding contest at 86 years old.

Kanazawa first gained popularity more than half a century ago when he won the Japan Championships for the first time at the age of 24. He was crowned ‘Mister Japan’ just three years later. When he was 34, he decided to step away from professional competition and remain on the sidelines for the next decade and a half. He made his comeback to bodybuilding before turning 50 to motivate his wife, who was prone to falling sick.

With a mission to inspire his wife, Kanazawa got back to training three hours a day in the gym to get ready for competitions again. He tweaked his diet by eliminating meat and fish, and instead, focused on incorporating meals made of rice, fermented soya beans, and miso soup with eggs. He also gave up smoking and drinking.

His efforts yielded him the results he was looking for as he won the Masters championships for bodybuilders age 40 and above at 57 years old. In 2016, he received a special medal when he placed sixth in the 65+ division, setting the record for being the oldest competitor in Japan.

86-year-old Toshisuke Kanazawa broke his own record to become the oldest bodybuilder to compete at a bodybuilding show in Japan.

Kanazawa took to the stages of the 68th edition of the Men’s Japan Bodybuilding Championships in Osaka on Oct. 9. Although he did not make the cut for the top 12, it is a remarkable feat that he was able to compete against talent much younger than himself.

“I’m still not anywhere near the finish line,” he said. “It’s important to keep setting goals and taking on challenges no matter how old you are.”

Overall, he was happy with the outcome.

“I’m grateful for just being able to participate,” he said. “I hope I can reach the hearts of others when they see me take on a challenge even in old age.”

Throughout his career, Kanazawa won the national championship 15 times overall and recently placed second at the 34th edition of the Hokkaido Championships in August. According to the Instagram post made on his account, Kanazawa has no plans of slowing down and intends to make an appearance at the World Masters Bodybuilding Championships in Spain next month.