Classic Physique standouts Kalecinski and Ruffin are sharpening each other with the help of Joe Bennett ahead of their clash at 2022 Mr. Olympia. 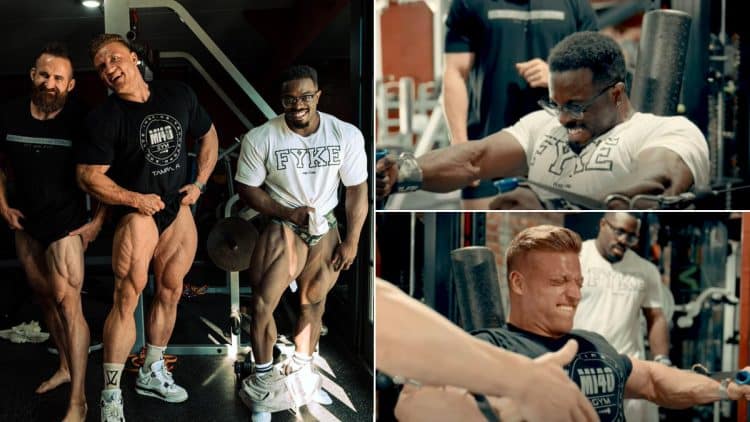 Urs Kalecinski and Terrence Ruffin are in the middle of preparations for 2022 Mr. Olympia, scheduled for December 15-18 in Las Vegas, Nevada. In a recent video, Kalecinski and Ruffin teamed up with ‘Hypertrophy Coach’ Joe Bennett for a demanding push workout/posing session.

The popularity of Urs Kalecinski continues to grow. Despite less experience than some of his rivals, the aesthetic bodybuilder from Germany has proven he has the tools and potential to reach the top of the sport. His young age, vibrant energy, and sharp conditioning were some of his standout features that caught the attention of fans across the world during his latest bodybuilding season.

Earlier this year, “The Miracle Bear” cemented himself as a top Classic Physique threat following his third-place finish at the 2022 Arnold Classic. The only athletes to place ahead of him in Ohio were two-time AC champion Terrence Ruffin, and runner-up Ramon Rocha Queiroz. A week after his bronze finish, Kalecinski dominated at the 2022 Boston Pro and won the title.

However, over the past two years at Olympia, Terrence has found himself in second place to ‘C-Bum.’ With the 2022 Mr. Olympia contest rapidly approaching, Kalecinski and Ruffin met with respected trainer Joe Bennett to make the most of their contest preps.

Note: Reps and sets were unclear based on the footage provided in the video.

“This is a special one. A Prime Incline Chest machine and guys in Germany don’t have it, so we can’t do it,” says Urs Kalecinski.

They move to seated cable flies next. The ‘Hypertrophy Coach’ told Urs to stop at the top and to straighten his elbows during this workout.

“When you contract, many would move like this [pulls inward], But Joe said it’s important to move the biceps into the center of the body. This will really push your chest, as you can see. Because those small adjustments REALLY make the difference,” says Kalecinski.

Ruffin fired off a set and then Bennett offered some more practical tips.

“Again, as long as the sternum doesn’t move, [that’s good]. You want your ribs and your spine to stay fixed. Ribs stay still, shoulder blades move as much as you want,” says Bennett.

Urs takes a moment to rehydrate before the group gets back to work.

After pushing to near failure, Urs completed one of his sets with a spot from Bennett.

Prior to practicing cuffed cable tricep extensions, Urs shared that Bennett modified the cables to maximize results during this exercise.

“Visualize that tricep. Nothing else moves,” says Bennett.

“That’s the point of cable crossovers, to press down, because that can be better for the joints and line up better, but you have people do them wrong. I always say, if someone is relatively narrow or actually pretty small – they can do a press down fine. There’s nothing wrong with doing a straight bar press down or whatever because then it all lines up with the joints.”

Known for his attention to detail, Bennett offered a few more pointers for muscle activation while using cable exercises.

Bennett says to let the forearm smash into the bicep during this movement.

“Make sure when you’re doing it that you let your forearm smash into your bicep. Then, take it as far back as you can go. Keep it short of a full extension,” says Bennett.

Following their workout demonstration, Kalecinski was first to remove his pump cover to practice a series of mandatory poses. Judging from the video, Urs looks to have added size since the last time fans saw him win at the Boston Pro.

A few minutes into the posing session, 2022 Arnold Classic champion Terrence Ruffin began sharpening his skills as well. Urs and Ruffin continued to practice posing for several minutes before calling it a day.

RELATED: Bodybuilder Urs Kalecinski Shares a 3,500-Calorie Diet & a Push Day Workout To Get Him Shredded For 2022 Olympia

Given their record of achievements, Urs and Terrence both intend to push Bumstead on stage later this year. Judging from their latest collaboration, Kalecinski and Ruffin are leaving no stone unturned 9 weeks out to ensure they bring the best packages of their careers.

Check out the full workout video below: