Adam Klink was not playing around when he set out to accomplish a feat that Dave Castro thought would be hard for any athlete to accomplish. 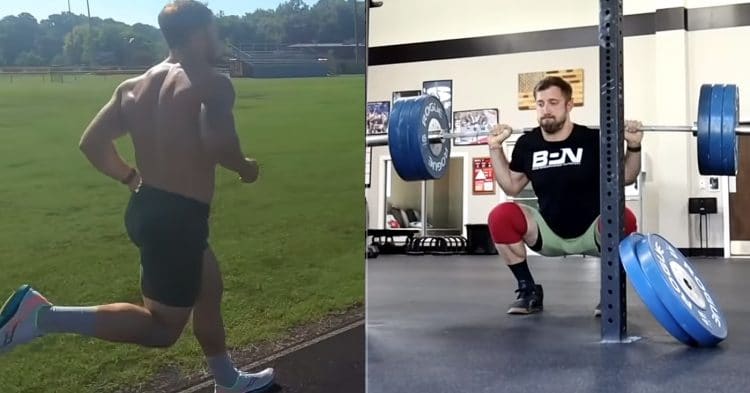 Adam Klink, head coach of CrossFit Krypton who placed second at the 2019 Games, went three for three two days ago when he ran a sub 4:56 mile, squatted 500lbs, and performed 50 kipping pull-ups unbroken in a single day.

Now, you’re probably wondering what for?… Once upon a time, Dave Castro established this feat in his book, Constructing The CrossFit Games as something that he thought would be very challenging for an athlete to not only run a sub-5-minute mile but to also squat 500lbs in one day.

Well, the day has come when someone conquered this feat. In addition, Klink pulled off 50 kipping pull-ups unbroken. Castro acknowledged that this would essentially be the finishing touch which would cement the individual who could pull it off as the one to set this record.

So, Klink actually started training for this feat 10 weeks ago and even attempted it on June 29 although he fell short with a time of 5:12. But he did complete a 500lb squat. So he decided to recover and continue training in his home of Virginia before attempting it once again.

He filmed the big day with the help of the 2015 Games champ Ben Smith and ended up running a 4:56 mile at his high school’s track of which he had his wife and toddler there supporting him as well.

“I finally achieved my goal of running a sub 5:00 mile and hitting a 500# Back Squat in the same day. I also threw in 50 unbroken kipping pull ups for Dave Castro. Enjoy!“

You watch the mile run at the 3:16 mark. At the completion of the run, it was clear that it took a lot out of him which you could imagine. He even took his shoes off and gave them to someone else to hold and then was congratulated by all who were there with him.

He finished off thanking a few people once again for coming out a few times to support him even saying, “All worth it in the end I guess right“. Then Smith jokingly told him, “it’s only worth it if you get 500, if not it’s a bust“.

Klink mentioned that it was one of the coolest things he has done recently and although he was nervous, it was definitely a big accomplishment for him. It was also a new PR for him too.

It’s also important to note that he had no spotters and was able to walk out and back with the weight no problem.

Then as part of what Klink called “Bonus footage” for Castro, he had to knock out those kipping pull-ups to put the icing on the cake. Watch it at 15:50.

It was definitely a memorable day for Adam Klink and all who were there with him to experience his record-setting performance. So he and his family celebrated with some Dunkin’ Donuts and called it a day…