Alexander Sedykh Shares Update On His Condition, And What Went Wrong During Failed 400kg Squat 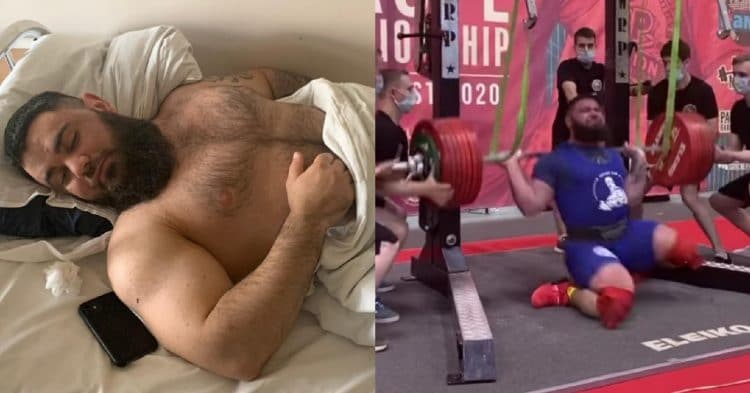 A couple of weeks ago, Russian powerlifter Alexander Sedykh broke both of his knees in a tragic powerlifting accident. Now he reveals what went wrong, how his recovery is coming, when he can compete again, and more.

If you have not seen it by now, the video of Sedykh collapsing and shattering his knees while squatting is terrible. He was looking to squat 400kg, after two successful warm ups during a recent powerlifting meet. However he would struggle with the weight from the start, ultimately falling under the weight, screaming out in pain as he broke both of his knees. Check out the video below, but be warned it is pretty brutal.

How Alexander Sedykh Is Recovering

Following the injury, Alexander Sedykh needed to get surgery on both of his knees. Although doctors said that he would need to learn to walk again, he seems to be handling things well. Speaking with FitnessVolt, he explained how his recovery process is coming along, and how he is feeling a few weeks after the incident.

“I feel better now and I’m in a stable condition,” Sedykh said. “But practically every day I feel pain in my legs. My body feels when it’s about to rain but hopefully it’s temporary.

“My trauma is the quadriceps tendon avulsion on the right leg patella, and the same on the left leg but, with the patella fracture,” he explained. “The process of recovering is going to take a lot of time. I’ll (be on bed rest) for about 2 months and take endless amount of medicine and go for procedures. I’ll have to learn how to walk but I think I’ll be able to train again in one year.”

What Went Wrong, And When Will He Return?

At the start of the day, Alexander Sedykh seemed to be doing well. He was able to squat 360kg and 380kg without much struggle. He reiterated that fact, saying that things were going well until the 400kg squat.

“That morning I felt fresh,” Sedykh said. “I was fully prepared for the competition and didn’t feel any anxiety at all. Usually I am so worried that I lose my appetite, but that day I was relaxed, and had a good breakfast. I knew that I had been training hard and would show the great results, and my weight was 269lbs.

“I arrived an hour and a half earlier the competition in order to warm up and get used to the hall,” he continued. “The physiological state of any sportsman has a huge impact in powerlifting, and the squat is my strongest (of the three lifts). On my way to the platform I was so sure that I’d win the competition. The first attempt was 794lbs (360kg) and it was quite easy. The second one was 838lbs (380kg) and it was easy too. Nothing hurt. My coach and I didn’t have any doubts that 882lbs (400kg) would be a goodlift. It wasn’t a limit for my body.”

Unfortunately in what seems to have been a bit of a freak accident, the 400kg ended up being too much. That being said, Alexander is not looking at retiring. While he still has a long road to recovery, he is hoping to get back on his feet, and return to competition in around a year.

“Sport is my life and I’ll definitely come back to training. I’m ready to squat with 838lbs (380kg) and even more, though I have to spend a lot of money on my recovery.”

Obviously this type of horrific injury would be enough to make anybody depressed. On the other hand, Alexander Sedykh is keeping a positive mindset. He says that he is making the most out of the bad situation, by being grateful for the people he met through this experience.

“I met so many sportsmen from Belarus, Ukraine, Argentina, Iran, and the USA,” Alexander said. “My case went down in the history of international powerlifting. My friends help me to stay positive and my wife is changing bandages regularly. I hope I’ll come to the platform again, and beat new world records!”

It is good to see Alexander Sedykh keeping his head up after such a huge setback. Hopefully his recovery will go well, and he can get back to training in the timetable that he hopes for. Moreover, if he is lucky there will be minimal long lasting effects of this injury.