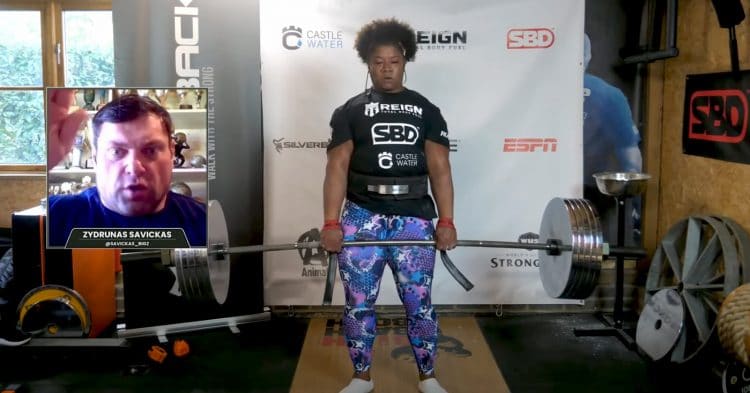 In March, she broke the Women’s Elephant Bar world record at the Arnold Strongman Classic with 621 lbs/281 kg. Fast forward to July and she’s the new Women’s log lift record holder (135kg/297.7lbs), a feat that she achieved as part of the first season of the World’s Ultimate Strongman Feats of Strength Series.

And just a few months later, she’s back at it again for season 2 of the World’s Ultimate Strongman Feats of Strength Series, but this time, breaking two women’s deadlift world records in the process.

Last week we saw the current World’s Strongest Woman champion Donna Moore break the Atlas Stone world record by lifting 377lb/171kg over the bar. But today was Thompson’s moment to shine and she did just that, in convincing fashion.

Her first attempt at the world record saw 280 kg/ 617 lbs on the bar, and it was buttery smooth. Her coach Laurence Shahlaei who is also one of the commentators was very pleased with this lift, as it was evident she has been putting in the work and making amazing progress.

She also broke the world record with this lift but definitely wasn’t done for the day.

Several minutes later and 290 kg/639 lbs on the bar, it was time to improve upon her previous world record performance and increase the gap. It was just 13 pounds more than her previous lift but that’s no small task, not to mention, she already pulled 617 lbs, which is taxing on the body.

Her second attempt was much more difficult to pull off as she had to really fight, but she ended up locking out at the top for a new deadlift world record!

Thompson wasn’t content with breaking the record twice… she wanted to do it three times in a single event by finishing strong with a 300 kg/661 lb deadlift. Shahlaei explained that this would likely be her last opportunity this year to attempt this type of feat in front of a crowd as most women’s competitions have been canceled.

However, this much weight would prove to be too much for her and you could see it from the very beginning. But that certainly doesn’t take away from her other incredible world record lifts, all done raw (with straps), without a suit.

Afterward, she asked how it felt to break the world record twice in one day, and her response…

“To be honest, I’m actually quite disappointed that I didn’t get 300kg. I think that was a number I was really looking to get today. But I will be happy eventually with the 290kg that I got today.”

She plans to attempt 300kg again in the near future, and also mentioned that Laurence Shahlaei wants to get her into a suit sometime soon, which will add a significant amount of weight to her deadlift. But for now, she just wants to let her body recover and go from there.

You can also watch the world record lift in the Instagram post below shared by World’s Ultimate Strongman.