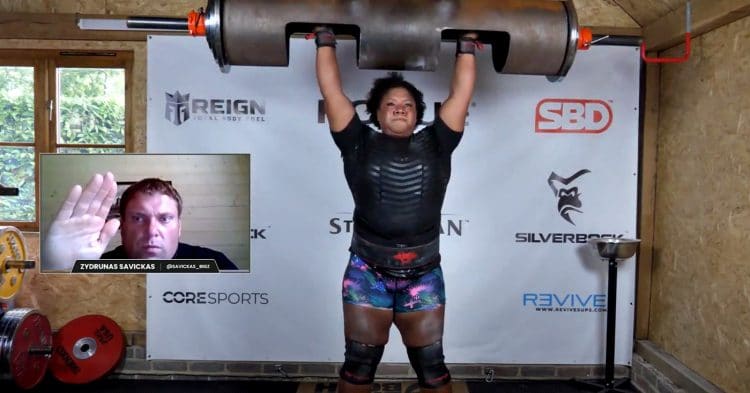 Last weekend, Russia’s Mikhail Shivlyakov and Terry Hollands from the U.K. faced off to see who could break the Master’s deadlift world record of 430kg. Mikhail was very close although he couldn’t quite get the lockout. He finished with a 421kg lift while Holland’s could not move the 430kg off the ground. As a result, Hickey James still owns the 430kg world record for the Master’s division.

She also set a world record in the elephant bar deadlift with 621 pounds at the 2020 Arnold Pro Strongwoman competition earlier this year.

So, as usual, Strongman legend Zydrunas Savickas was the head referee, while Laurence Shahlaei (Thompson’s coach) and Mark Boyd were in charge of the commentary. The deadlift attempt was streamed live on the Rogue Fitness YouTube channel and Coresports as well.

Her first attempt was 110kg/242.5lbs which was at around the -30:20 mark. She breezed through this lift but forgot she would only get the down signal for the record attempt. So, she held it for a little longer than needed but all was good.

The second attempt was 120kg/264.6lbs which you can see at the -31:30. This lift was obviously a little more challenging for her but not a problem although she was a little shaky. Then again, that’s a lot of weight to be lifting overhead.

It was time for the World record attempt where she went for 130kg/286lbs and absolutely nailed it! Watch it at around the -23:42 mark.

But it wasn’t over just yet as Thompson definitely had more in the tank.

For the fourth attempt, Thompson went with 135kg/297.7lbs at the -13:30 mark. She failed this attempt but wanted to try for another.

For her fifth attempt of 135kg/297.7lbs, Thompson looked amazing and was able to complete the lift which you can watch at the -4:47 mark.

She was completely stoked to have been able to break the record jumping for joy aftward and it’s was a job well done for the elite Strongwoman competitor.

Afterward, she said in an interview about breaking the record, “It feels pretty good, I’m happy. I wasn’t happy with just getting 1kg so I wanted to get a little bit more.”

As for what’s next for Andrea Thompson… “I don’t know to be honest. All of the competitions up until October have been canceled. I think I might think about going to World’s in November and then possibly qualify for the Arnold in December, so I don’t know yet.”

To end she wanted to “wish all of her American fans and followers a Happy Independence Day,” and then she acknowledged all the support she has been getting. And lastly, she was asked about any words of advice for aspiring Strongman and Strongwomen of which she offered…

“Don’t give up on what you believe you can get be selfish if you want something hard enough, bad enough, you have to be selfish, cut out all of the negativity in your life, and just go for it.”

As for the next world’s Ultimate Strongman challenge, Strongman competitors J.F Caron of Canada and Adam Bishop of Great Britain will go head-to-head in the ‘400kg deadlift for reps’ world record on July 11th. These are two top Strongman athletes and it’s going to be an exciting event so make sure to tune in!

Do The Band Pull-Apart For Better Posture and Performance