Donna Moore lifts a massive 377lb stone for a world record as part of the World's Ultimate Strongman Feats of Strength Series season 2! 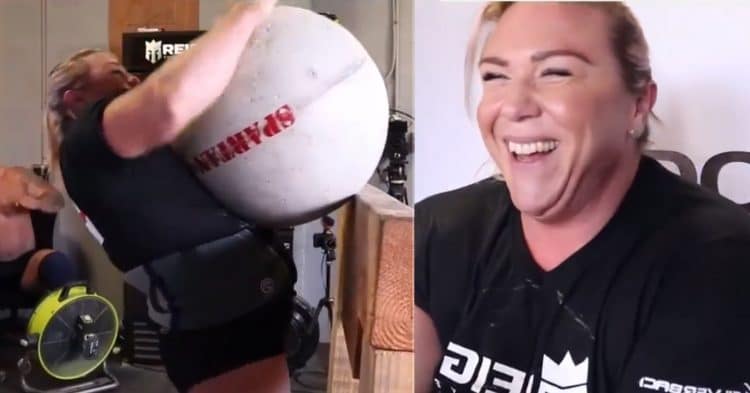 Season 1 of the World’s Ultimate Strongman Feats of Strength Series definitely lived up to the hype with many top strength athletes attempting and breaking world records. But now we’re on to season 2 and so far it has been just as exciting. The format is exactly the same for this season, so the event takes place remotely due to the current global health situation. Laurence Shahlaei and Mark Boyd host the competition while Zydrunas Savickas is the head referee.

Rauno Heinla of Estonia and Konstantine Janashia of Georgia (the country) started it off two weeks ago when they went head-to-head in the 400kg/800lb deadlift for reps, with Heinla winning and breaking the world record by doing 6 reps. Then a week later, USA’s Trey Mitchell attempted the 400kg for reps but only managed two reps, the same as Janashia.

It wasn’t easy but there was no way she wasn’t going to get the 377lb/171kg stone over the platform, and she did it rather quickly. She smiled big after her performance and even celebrated with a little dance.

She did a few warm-ups before the big lift and then it was showtime.

Watch her performance below…

Moore also broke the no tacky Atlas stone world record back in 2018 when she lifted a 147kg/324lb stone over the 44″ bar. Then in 2019, she set the Ardblair Stones world record at the Blairgowrie & Rattray Highland Games, with a time of 37.14 seconds. This performance is just another impressive record to add to her resume.

Tom Stoltman of the UK was paired up with Moore for today’s record attempts to break his own 286kg/630lb Atlas Stone world that he set in May. However, after lifting a 265kg/584lb stone over the bar as part of the warm-ups, he experienced pain in his bicep and decided not to attempt the world record.

It was a good build-up but not worth the risk. And as he explained, he’ll just have to attempt the world record another time.