Life and accomplishments of Karina Elle 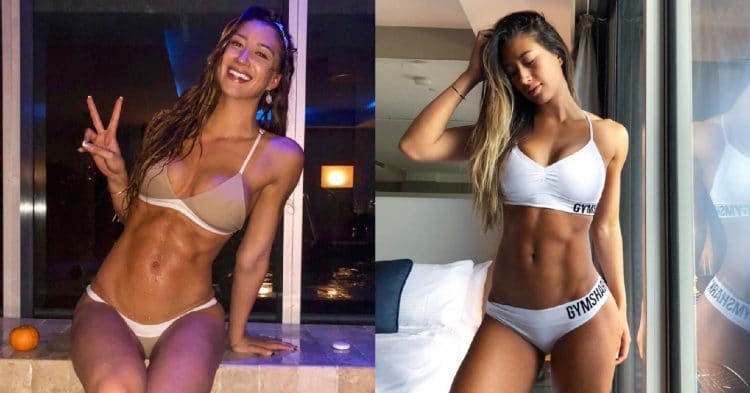 Karina Elle Lisenbee is an American Instagram model, champion Bikini competitor, and sponsored athlete. She has won the World Fitness Federation Pro Bikini Championship and has modeled for various publications. This is her complete profile, biography, training regimen, diet plan, and more.

In high school, she was a cheerleader while also participating in track and field, and cross country. She has stated that her sibling rivalry with her older brother sparked her desire to compete in sports. She also has a younger sister.

At 16, very tall and lean, Lisenbee was discovered by a photographer at the mall who was also accompanied by IFBB Bikini Pro Ana Delia. This event led to the start of her modeling career.

However, after some time as a fashion model, she decided that she wanted to be unique and not just another pretty face, and therefore, left the fashion industry. Lisenbee attended the University of Florida where she became a part-time fitness instructor, before eventually becoming a Bikini competitor due to her passion for fitness. One of her most notable wins was the World Fitness Federation Pro Bikini Championship. But she’d ultimately quit competing to focus on her own branding of which she has achieved much success.

Lisenbee gained a lot of attention not only for her exotic looks from her Asian and European ethnic background, and top-tier physique, but she’s also known for posting crazy workouts on her Instagram that drew lots of interest.

In an interview several years back, she explained that she never idolized or looked to anyone in the industry for inspiration as she doesn’t want to have a warped image of her appearance because she trains for herself.

Karina Elle’s first contest was the 2014 World Fitness Federation Pro Bikini Championship. She won her Bikini class and the overall title, and this point, she gained even more confidence that fitness was definitely her thing.

However, she wouldn’t go on to compete for long and ultimately focused on marketing herself as a prominent figure in the fitness industry.

Lisenbee has mentioned that she trains full-body for roughly 20-60 minutes per session. She starts with weights, training heavy on her exercises, especially squats, and then does high-intensity training (HIIT) involving burpees, jump squats, and sprints. Being active on a daily basis is a must for her because it makes her feel good physically and mentally and keeps her lean. She also thinks everyone should be more active to live healthier and be in better shape.

She’s known to train at Gold’s Gym Venice, California but really enjoys training outdoors and shares many clips of her training sessions on social media.

“I’m addicted to the endorphins. It gives me that happy rush just like go workout and get sweaty. It just makes me feel good. I stay motivated by remembering how I’m going to feel after a workout and just how refreshed and happy I’m going to be.”

She likes to use lighter weight and higher reps on upper body training days. Here’s one of her shoulder routines.

Lisenbee eats healthy for the most part with foods such as chicken, salmon, eggs, broccoli, brown rice, potatoes, raw nuts, and avocado, making up a decent portion of her diet. She doesn’t count calories but rather pays attention to her portions, and has admitted to having a sweet tooth, in addition to enjoying the less healthy foods such as burgers and fries.

But she can afford to eat these foods due to being very active. In fact, Lisenbee is known to have some of the best abs.

But Lisenbee also occasionally shares her recipes and is known for being pretty decent in the kitchen.

If you want a tasty and healthy recipe, here she shows how to make 4-ingredient, flourless sweet potato brownies. It really is super simple!

She was named “most in-demand fitness model” in 2014 by a popular magazine. Not to mention, she appeared on the cover of a popular Singapore magazine back in 2013 and has had a few small roles in commercials. She’s also a GymShark and Optimum Nutrition athlete.

Her boyfriend (sorry guys) Phillipe Leblonde is often seen in her social posts. Lisenbee also takes time off from social media every now and then.

Karine Elle Lisenbee was blessed with the looks, the shape, and pretty much everything that she needed to rise through the ranks to become one of the top fitness models in the world. That’s not taking anything away from her work ethic though because she trains hard and maintains a good diet. It also helps that she has a very athletic background where she developed the habit of always being active.

While she’s done fashion modeling and competed as a Bikini athlete, she’s ultimately happiest when she’s inspiring others and connecting with her fans around the world.

Three Common Interval Training Mistakes You Might be Making

Natalia Abraham Coelho is an IFBB professional Women's Physique competitor and a two-time winner of the Physique International (Arnold Classic)...

Andrei Deiu is a Men's Physique bodybuilder and Fitness Model. This is the life and story of this Romania influencer,...

Lauralie Chapados won the Bikini title at the 2021 Sacramento Pro. Athletes eyeing a spot at 2022 Olympia competed on...

Canadian IFBB Figure athlete Melissa Bumstead is a promising competitor and sponsored athlete. However she did not even find her...