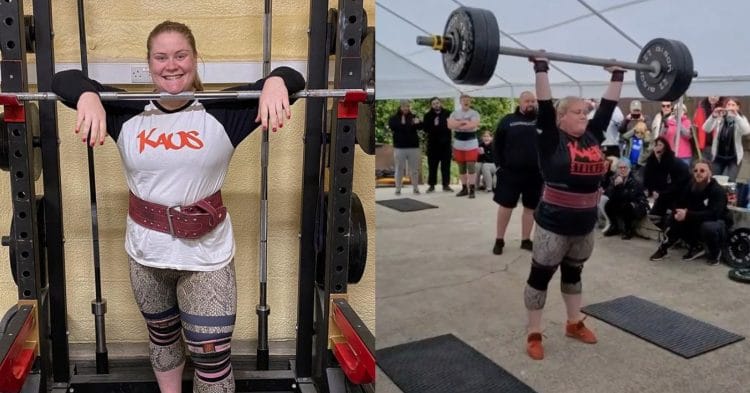 Over the weekend, strongmen and strongwomen met at the Tamworth’s Strongest Man event, to put their skills to the test. This would see a ton of impressive performances, including a new world record for Annabelle Chapman.

Heading into this strongman event, held in Staffordshire, England, the world record for the axle bar clean & press belonged to Samantha Coleman, who pressed 260.6lb (118.2lb) back in 2017. However by the end of the contest, that accolade would belong to Chapman.

Just two years into her career as a strongwoman, Annabelle has already gained a reputation for her tremendous skill. Just six short months before the Tamworth’s Strongest Man, she scored a massive win at the England’s Strongest Woman, showing to her fellow contemporaries that she had arrived.

Annabelle Chapman came to this meet over the weekend with one goal in mind: to score a new world record for the axle press. Alongside the main contest, she and fan favorite strongwoman Rhianon Lovelace attempted to capture this record, in the heavyweight and lightweight categories respectively.

As a post to her Instagram shows, Annabelle was successful in her efforts towards this goal. The 26-year old clean and pressed 279.1lb (126.6kg) on her first try, to break the record, before pressing 290.3lb (131.7kg) to extend that record even further.

As Annabelle alludes to in the post, she tried to do even better than this on her third attempt, by going for a 300.9lb (136.5kg) axle press. Unfortunately she was not able to successful hit this weight.

Juxtaposed to Chapman, Rhianon Lovelace was unable to get past her current axle press world record for the lightweight division. Although she had been surpassing that 203.9lb mark in training, she did not replicate that success in the meet.

That being said, Lovelace still holds the world record for this lift, as well as the Atlas Stone world record. So even though she did not get her desired result here, there is no doubt that she will bounce back in a big way moving forward.

Congratulations are in order for Annabelle Chapman for scoring this massive new world record over the weekend. Considering how young she is, both in physical age and years competing as a strongwoman, the future is bright for this young rising star.

Read also:Top 10 Strongwoman Athletes to Pay Attention to in 2021

How to Make Your Own Pre-Workout Drink (Cheap and Easy)