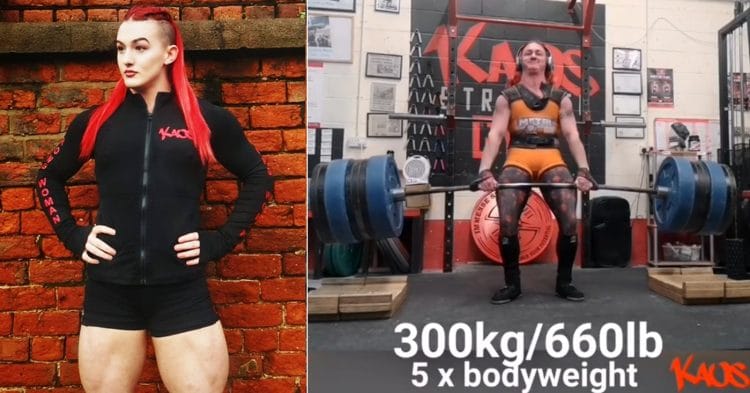 Things have really been picking up steam for Rhianon Lovelace as she looks to kick off the year with a bang. In the effort to do just that, she scored a massive deadlift in a recent training session.

It was just a little over a year ago that we wrote about Lovelace hitting a monstrous 600lb deadlift. This seemed to be the start of a big year for her, and in almost every way possible, it was.

Not only did Rhianon go on to score a world record Atlas Stone lift, but she was then crowned the pound-for-pound strongest woman in the world. She was the first to receive such an honor as well.

Rhianon Lovelace topped our list of strongwoman athletes to watch in 2021, and she proved why that is with a recent performance in the gym. She posted the mind blowing deadlift session to her Instagram.

This video sees her using 3-inch blocks to deadlift a brain melting 300kg (660lb), at a bodyweight of just under 60kg (132lb). This means that she managed to pull an unbelievable five times her bodyweight.

Absolutely over the moon!
My body is handling these weights really well, no issues whatsoever.

Im just about to turn 25, this is incredibly exciting for the future!”

This was an impressive performance from Rhianon to say the least, despite it being on blocks. It was clearly a battle, but a strong showing out of the young athlete nonetheless.

Here she is just a few days earlier, doing a massive 280kg deadlift. With the way this moved, it was no wonder that she went straight for the 300kg about a week later.

At just 25 years old, it seems likely that Rhianon Lovelace has a lot of room to grow, before she reaches her peak in strongwoman. With numerous records under her belt already, the future looks unbelievably bright for this young athlete.

There is no telling where she will go from here, or what other world records she will capture. However one thing is clear, and that is the fact that Rhianon is here to stay.