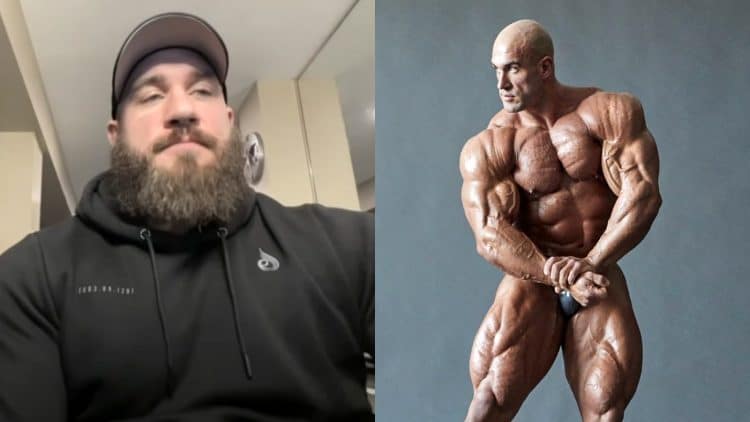 Canadian IFBB Pro bodybuilder Antoine Vaillant recently opened up about his long-drawn battle with drug addiction. Vaillant last competed at the 2020 Mr. Olympia and finished 14th in the open division. However, things went south quickly after Olympia as the 34-year-old relapsed into drug use. During a recent interview with Muscle And Fitness, Antoine Vaillant spoke candidly about his past struggles and also laid out his career plans for the new year.

Like every addict, Antoine Vaillant’s addiction started with occasional use and soon became an inseparable part of his life. The 34-year-old revealed that his routine underwent a significant change after earning the IFBB pro card which further fuelled his dependence on drugs.

“I was doing drugs for fun when I was younger. That gave me some type of instant reward, of course, in the brain. Before that, life was kind of dull for me. Then when I found that, what I was lacking, kind of went away. So that kind of filled a void.”

“After my pro card I felt entitled to party because I worked hard. No schedule, no structure, no girlfriend back then. I was like I can do this whenever I want and it was like almost every day.”

Antoine Vaillant’s efforts to get rid of drug addiction

Antoine Vaillant has gone through rehab four times in the last seven years and stayed sober for most of that time. A friend’s death on the Christmas of 2014 compelled Vaillant to think about getting rid of the drugs for the first time. Soon after, the 34-year-old realized that it was easier said than done.

“That was the first time I decided to stop using drugs but that was in (January of) 2015. It’s like I didn’t understand that just deciding won’t fix it.”

“My friend dies, I decide to stop doing drugs and two weeks later I do it again,” Antoine Vaillant said.

Vaillant further added that he decided to go to rehab after making several attempts on his own. Having stayed sober for the majority of the time from 2018 to 2020, he gave in to addiction after Olympia 2020. In addition to his own mistakes, Vaillant highlighted the role of Covid-19 imposed restrictions on the lives of addicts in general. In his case, the inability to keep in touch with other recovering addicts or attend recovery meetings played a major role in his relapse. Antoine Vaillant explained:

“After Olympia I relapsed again. With all the knowledge and recovery I had because I stopped doing what got me there for the whole 2020.”

“2020 was a rough year for everybody and especially for addicts and people suffering from other mental issues because everything was like thrown off. You’re isolated and this and that…”

Antoine Vaillant talks about the psychology behind relapse

Drug use is undeniably harmful and has the potential to ruin someone’s life if not altogether end it right away. In spite of this, a vast majority of addicts find it difficult to resist them. While speaking about what causes relapse, Antoine Vaillant said that in the absence of a strong support system to curb the cravings, addiction forces the recovering addict to think only about the positive effects of drugs and shuts their brains down to the negative side of it.

“It’s like you’re doing selective memory. You’re gonna think only about the good times and you won’t think about all the bad times. You think you can get away with it again which doesn’t make sense.”

“Once you start again with whatever is your problem, the obsession kicks in.” Antoine Vaillant said.

Bodybuilding is a sport that requires a tremendous amount of discipline, dedication, hard work, and most of all, self-control. Therefore it’s natural for us to wonder how can someone like Antoine Vaillant, who has checked all those boxes as a bodybuilder, fail to get rid of addictions. While explaining this, Vaillant said that that bodybuilding is for sure a difficult thing. However, it is not remotely as difficult as overcoming drugs. Vaillant said:

“Let’s say one out of ten, ten is the hardest. Doing prep for a show is like a difficulty number four for discipline. But even if you have discipline for stopping using drugs for an addict is like ten out of ten or twelve out of ten.”

Thankfully Antoine Vaillant has surrounded himself with the right people and is taking is following the principles of his recovery program with utmost sincerity. However, he firmly believes that the tendency is hardwired in his brain and he will have to continue fighting the addiction his entire life.

Antoine Vaillant has overcome the drug issue and has his eyes set on making a meaningful return to competition. The 34-year-old is interested in competing at the 2022 Toronto Pro. However, he is undecided on participating as a major health reset is his priority at the moment. Vaillant said that he does not have any health issues but wants to get his body into a perfectly normal condition before entertaining an idea of a comeback.

“I was 307lbs three or four weeks ago. But now I am just clearing out the system. I have a goal for 2022 to get a super health reset before doing a run for shows. Ro right now I’m 286lbs.”

“I had 2022 Toronto Pro in six months but I just did some blood work and everything. It’s just like there is nothing too crazy but you know what, for 2022, I want to have a big reset. Bring everything back to like really normal. Not like normal for bodybuilder… like normal normal,” Antoine Vaillant said.

Antoine Vaillant’s career has been marked by personal struggles and injuries. However, he has shown the resilience to build himself back up with persistent efforts. As Vaillant embarks on this journey to build himself again, Fitness Volt wishes him all the best in his pursuit.