Canada's Regan Grimes looking to pack on muscles in preparation for the 2022 Arnold Classic. 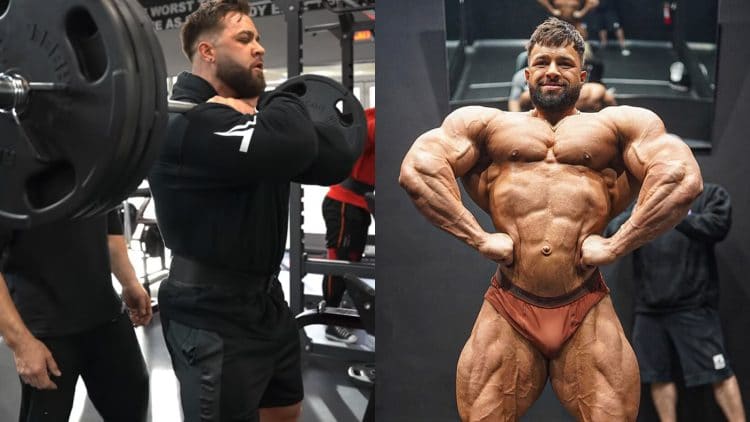 3-time Olympia competitor Regan Grimes is a pillar of consistency when it comes to bodybuilding. Known for his relentless work ethic, Canada’s Grimes took to social media and showed off a couple of insane leg workouts with only 8-weeks until the 2022 Arnold Classic returns.

Regan Grimes has been busy in the gym training hard in preparation for the 2022 Arnold Classic. Moving full-steam ahead, Grimes is obviously making huge strides in the gym. Grimes is a very competitive bodybuilder and secured 15th place at the 2021 Mr. Olympia.

After seeking posing advice from 4X Mr. Olympia champ Jay Cutler, Regan Grimes will be bringing his A-game when the second biggest bodybuilding show returns to Ohio in just a short period of time. While working on his stage form, Grimes trained in Las Vegas at the Powerhouse Gym. Following the session with Cutler, it’s clear that Grimes has many qualities of a future champion in the sport.

With an emphasis on leg development, Regan Grimes focused on some taxing front squats with a weight of around 375lbs. Following the first workout, Grimes front squatted 315lbs and fired off 10-reps in an effort to hit that desired 100 repetitions number. The bodybuilding great admits that his heaviest set was 375lbs and lifted until failure after notching his eighth rep.

Recently, the bodybuilding great took to Instagram and showed a demanding leg day workout. Regan Grimes was spotted by his coach and fired off repetitions to get a good pump in on Sunday.

The IFBB pro looks determined to make it to the podium this year. Training alongside Milos Sarcev, Grimes revealed the pair worked through 100 reps at varying weights  Within the first video, Regan Grimes is seen front squatting 375lbs until failure. In the second video, Grimes works through 315lbs front squats but does so for a total of 12 reps, ensuring the bodybuilder hits an optimum total.

During his time training with Sarcev, the bodybuilder has steadily improved his abdominal muscles and has noticeably improved conditioning. Sarcev is confident that within a few years that Regan Grimes could steal 1st place at a Mr. Olympia show. Let’s see if Grimes can follow in Nick Walker’s footsteps and win his debut at the 2022 Arnold Classic.

With the 2022 Arnold Classic rapidly approaching, Regan Grimes has a huge opportunity to kick off the bodybuilding season with a ton of momentum. In addition, the pressure surrounding the 2022 Arnold is at an all-time high considering the cash prizes have dramatically increased. In fact, the cash prize for the Arnold Classic Physique increased from $7,000 to $60,000.

Regan Grimes is taking the requisite time in the gym to get his physique prepped for competition. Undoubtedly the Canadian is a front-runner to steal the show in Columbus, Ohio. After front squatting 315lbs/375lbs, the rising bodybuilder is controlling what he can to have a big year in the sport.