Antoine Vaillant suffers pretty severe tear to his left bicep, which will require him to get surgery to repair 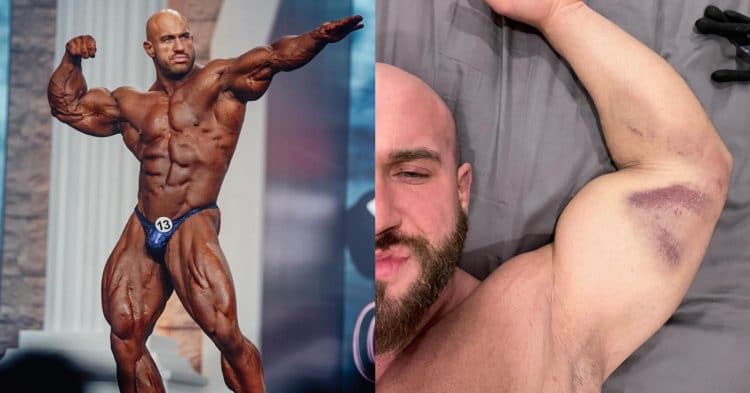 Top up and coming bodybuilder Antoine Vaillant is no stranger to dealing with injury. However he is in that boat yet again, as he has suffered a pretty sever bicep tear that is going to result in him needing surgery.

The last time that we saw Vaillant on stage was for the 2020 Olympia, where he scored 14th place. This came at the end of a successful year, as he came in 7th at the New York Pro, and won the California Pro.

Prior to that three contest run in 2020, Antoine had not competed since 2018. That was due to a few factors, but not least of which was a gruesome tear that he suffered to his right bicep, keeping him sidelined while he recovered.

Now it seems that Antoine Vaillant is in the same situation yet again, only this time with his left bicep. He revealed with a post to his Instagram that he had injured his left arm in training, showing some pictures of the early stages of bruising.

He says that this injury was suffered about a week ago, but the bruising in the image he shared at first, does not look that bad. He also included an image of the scan which shows that things are much worse than they appear on the surface.

“So this happened again. At least this time it’s the left, meaning I still have my good hand to wipe my ass. Full clean cut tear even better than last time. My bicep is litteraly hanging from the top like a christmas ornament,” Vaillant wrote.

This was not the last of the updates that Antoine would provide on his injured arm. A few short hours later, he shared another post that revealed the progression of the gnarly bruising on his arm, which is getting worse by the day.

Aside from that, Vaillant also explained that he was looking to get surgery on the bicep, to repair the torn muscle. For this procedure, he will be going through the same surgeon who fixed up his right arm two years prior.

“Good morning. Update: Every day I wake up since the tear new shades of purple with hints of subtle blues appear around the elbow. Always interesting to see how freaky it gets. I did a good job at managing inflammation this time around!

The fact I was rebounding from a contest prep diet last time probably didnt help. (I tore my right 2 years ago) This tear (left bicep) happened 8 days ago. Meeting Dr.Chahal tomorrow for pre-op, same surgeon who did my right bicep reattachment surgery. Stay tuned!” Vaillant wrote before adding

“Thanks for all the comments and messages I had so far. I guess I’ll just show you guys another succesful comeback from a setback!”

Antoine Vaillant is going in for surgery later this week, and one can not help but wish him the best and a speedy recovery. Hopefully all goes well with the procedure, and there are no complications in the healing process, so he can get back on stage sooner than later.