The Terminator shares his thoughts on CrossFit, Diet and Training!

Since the new Terminator movie is a month away, the timing is perfect for some promo stuff featuring body building’s biggest star – Arnold Schwarzenegger.  Arnold took the time out of his busy schedule to show  Men’s Health crew his office and talk about his (mostly) vegan diet, post-heart surgery training regime and other stuff.

Like we mentioned already, his diet is mostly vegan these days. He is now a strong advocate for a vegan lifestyle and eating none meat-based foods. So it should come to no surprise that his office fridge is stocked up with fruits and veggies.  He still enjoys a steak but 90% of his protein sources come from fruits, seeds, and veggies.

His daily protein shake consists of; almond milk( around 100ml), few drops of tart cherry juice(for inflammation reduction), 1 whole banana, and 1 whole(raw with eggshell) egg. Arnold also suggested he tends to add some schnapps or tequila sometimes to give the shake some extra spice.

During his younger, competing days, Arnold’s diet used to consist of downing an entire chicken and chugging a pitcher of beer as a way of getting his post-workout proteins in. However, these days, he points out that he is much more conscious about his food intake and enjoys greens, lettuces, almond milk and stuff like that…even though his favorite thing to cook is still a good old fashioned steak.

Also worth noting, Arnold is not a fan of trendy, popular and “social media-friendly” diets like Keto or intermittent fasting. He’s a simple man-when he’s trying to cut weight, or get in shape for a role he cuts out the sugars and white bread.

Does Arnold take supplements and does he have “cheat days“? Yes and hell yes. Though he doesn’t divulge into details he mentions that he takes multivitamins and stuff like that in the form of supplements and regarding cheat meals he shares an interesting story from his competing days.

Three days prior to his 1970 Mr. Olympia contests he and his best friend, who tragically died recently, Franco Columbu, went into “House of Pies” and presumably ate everything they had there.

Now before you go to McDonald’s and order half the menu while snickering to yourself “that’s what Arnold would do“, The Terminator gives an “asterisk” to the story;  “calories in-calories out“, meaning you have to burn off everything unhealthy you put in your body.

Junk food won’t magically not-make you fat just because you did two push-ups yesterday. You gotta get your ass to the gym slam some iron on to the bar and put in the needed pain and suffering for those cheeseburgers to not turn into love handles. 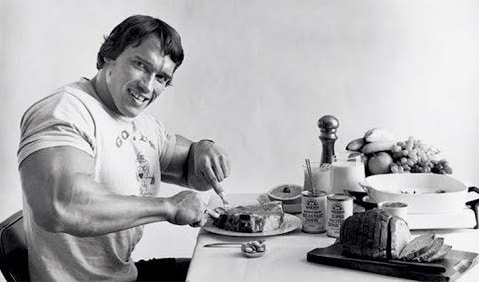 How does the 7x Mr. Olympia train these days, considering he had open-heart surgery a year ago? Well, he takes things slowly these days…he doesn’t go as hard as he did in the Pumping Iron days, but he still goes to the legendary Gold’s Gym at Venice Beach, California, every morning, rides the bike and sometimes even sneaks in a late-night workout in his home gym. Not bad at all for a 72-year-old!

Towards the end of the video, it was time for “rapid-fire” questions part of the video in which Arnold dropped some interesting opinions on a few subjects.

Q: Dumbells or kettlebells?
A: “It makes no difference because the muscle doesn’t see what you’re holding in your hands”

Q: Running on the treadmill or in the great outdoors?
A: “Both”

Q: If you could work out with anyone in the world, dead or alive-who would it be?
A: “I would like to work-out with Eugene Sandow, he’s one of my idols. He was the first Bodybuilder and also a Strongman.”

When asked to comment on how many celebrities who appear on the “gym and fridge” segments say that he is their ultimate/dream work-out partner, the terminator keeps it cool and says; “I’m here, at Gold’s Gym, every morning. If you want to work-out come on down and we’ll have a good time”.