The documentary 'Game Changers' will feature Schwarzenegger and talk of plant-based nutrition! 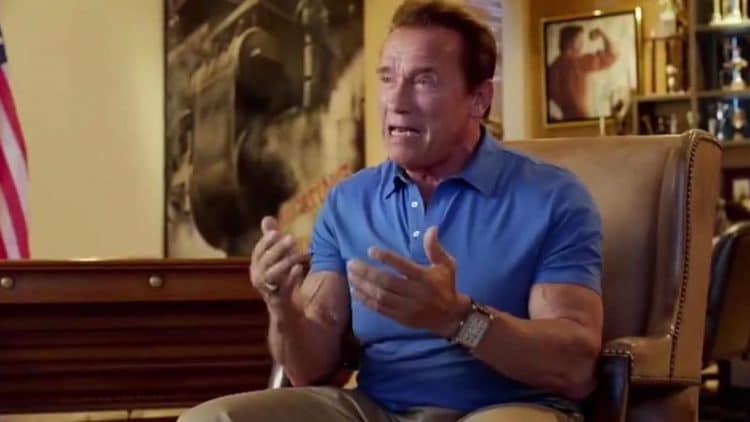 The bodybuilding legend Arnold Schwarzenegger has his hands in a lot of things, from his supplement company ‘Ladder’ to undercover pranks for electric car promotions, and now he’s talking plant-based nutrition.

Arnold Schwarzenegger teamed up with executive producers James Cameron (Terminator director) and Jackie Chan for the upcoming documentary ‘Game Changers’ which seeks to spread the message about environmental safety and the advantages of plant-based based nutrition.

The film is slated for a September release and will feature several elite athletes.

Check out the trailer below…

Now, the subject of plant-based vs. meat diets will always result in a debate from the opposition. And that’s exactly what happened with Arnold Schwarzenegger’s statements about eating meat. He explained in the trailer that commercials promoting meat as a “real man’s food” is a big marketing ploy.

But, powerlifter Stan Efferding and Shawn Baker, MD, weren’t having any of it. So, both took to Instagram to express why they think Schwarzenegger is misinformed.

“I’ve received 100 DM’s already today on this post by @schwarzenegger. I just copy and paste Dr. Shawn Bakers response below or link his post. I have Vegan clients. I eat vegetables. I recommend vegetables in the Vertical Diet. Having said that, performing optimally for competitive athletics as a Vegan is the exception not the rule.

I’ve seen way more failures than successes. It almost always catches up with them. With lots of supplements and PED’s it can be made to work for some but that’s hardly an ideal scenario.”

“They’ve replaced @schwarzeneggerwith a brain dead robot to hype their vegan bullshit propaganda- @schwarzenegger would have never been Mr Olympia as a vegan”.

Baker then went down the list of athletes featured in the documentary, explaining how each is not benefitting from a plant-based diet as much as the film tried to lead everyone to believe…

“One of the Athletes who was originally in the film, Tim Schieff, had to quit Veganism because it ruined his health, the Olympic lifter Kendrick Farris, built all of his strength on a meat eating diet and then after going vegan he bombed in the Olympics turning in the worst performance of his career, the Strongman Patrick Baboumian, bullt his muscle as a meat eater, took a bunch of steroids as a vegan and was no where eveen close to being the world’s strongest man as the vegans claim, the body builder Nimai Delgado, built his muscle as a vegetarian eating milk, eggs and whey protein and is a best only a mid level physique competitor that would not even get on the stage with with actual pro level meat eating bodybuilders!”

Baker explained that being vegan cannot possibly allow you to reach your full potential, even with good genetics, drugs, and hard work. And he’s not giving up meat which was made very clear.

“This highlights that with good genetics, +/- drugs, hard work you can be an athlete but in no way allows you to reach your true potential as a vegan! @schwarzenegger , we are NEVER giving up meat- the bullshit about saving the planet is complete garbage! A soy filled mono-crop landscape is a fucking disaster and will only lead to a sick population and a destroyed soil and ecosystem- if you want to not be a hypocrite get behind regenerative agriculture and stop misleading young people about the bullshit vegan agenda- Cameron and his wife are turning into skeletal wraiths and giving his message your voice out of friendship or money is a huge mistake!“

These might be harsh words from Shawn Baker, MD. But, he has just as much of a right to state his side of the argument. But, whether or not someone chooses to go plant-based or eat meat is a personal preference.

So, most people are going to eat a diet which works for them and there will likely always be an argument to be had on both sides.