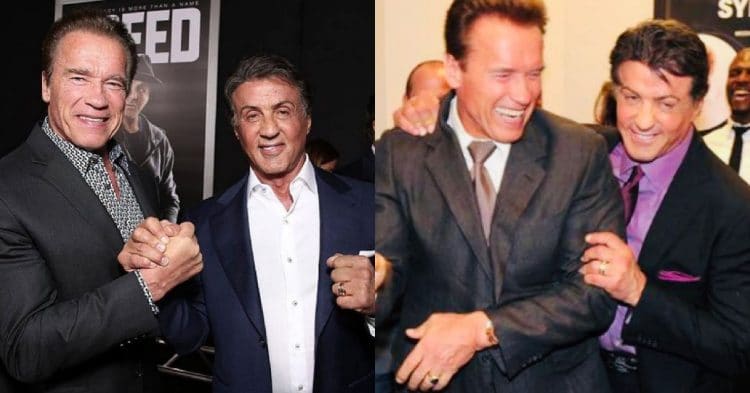 It is not a secret that Arnold Schwarzenegger and Sylvester Stallone were once bitter rivals. Now, the bodybuilding legend explains how he sqaushed the beef with the Hollywood action star.

For the better part of two decades, Arnold Schwarzenegger and Sylvester Stallone were the biggest action stars in Hollywood. For every Rocky and Rambo movie Stallone put out, Arnold would return fire with Commando and Terminator flicks. This, combined with the two’s competitive nature, led them to become huge rivals during this period.

However what was once an intense rivalry became a close friendship, as Arnold was able to put his differences aside with Sylvester, and the two built a strong relationship.

But how did that happen? Well as Arnold explained, at the Sunday Showcase, following the Arnold Classic, it was actually his decision to squash the beef. It actually all started with Schwarzenegger’s close friend, the late Franco Columbu.

“I think one of the reasons Sly got so ripped, after he did the Rocky movie, he totally changed his body, was because he trained with Franco,” Arnold said. “Because Franco said to him ‘Look, I think think you have good potential, but we’ve got to put you on a diet. You’ve got to do more reps and more sets, and really step it up and do two hours of training every day,’ and that’s what Sly did. Besides all of the other training he did, fight training for scenes, and all the choreographing.

“I remember doing the movies together, I was doing Conan (The Barbarian) number 2 in Mexico, and he was doing a lot shooting for Rambo in Mexico. So we would kind of be there at the same time, trying to get the better of each other. He was trying to outdo me, and I was trying to outdo him. So it was like an all-out competition of who could sell more tickets at the box office, who can kill more people on the movie screen, who can kill people in a more violent way, who can use bigger knives, who can use bigger guns.”

Arnold went on to detail the funny situation that led to them finally putting away their differences, and becoming friends.

“It was pretty funny, but eventually it came to a crescendo, the whole thing. Then we started Planet Hollywood, the restaurant chain, and they wanted me to be there as a partner. And Sly’s lawyer, who was also my lawyer, he called me to say ‘Look I know you’ve got this big deal now, with the Planet Hollywood people. Can we get Sly in there? Because otherwise he would kill me. He would be so jealous that you got the deal and not him.’

“And I said to myself, even though this was at the height of us fighting, that I would go and just be gracious, and make this the point where we turned our relationship around. So I said ‘Yes, have him come in.'”

Arnold Schwarzenegger went on to explain that he and Sylvester Stallone began traveling the world. It was this, that caused them to become good friends. Good thing too, because they have one of the best relationships in all of Hollywood.