Ashton also put up a 960 kg (2116 lbs) total in training and beat three of his current competition PRs. 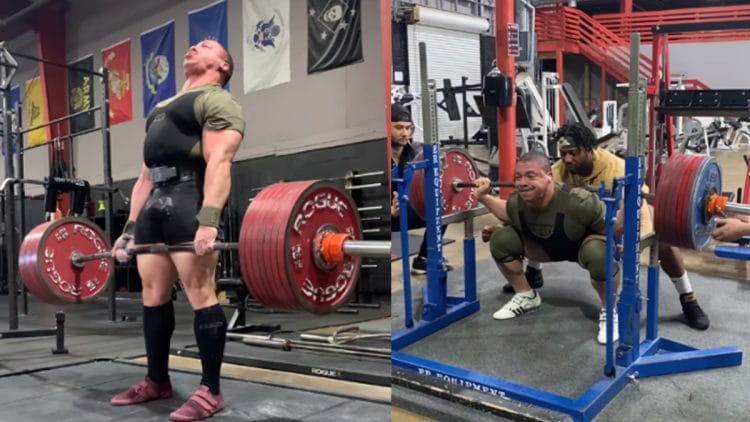 Just 14 days are left until the 2022 Arnold Sports Festival, which will involve a powerlifting meet regulated by the USAPL. Some updates from the competitors are coming in, and Ashton Rouska just shared his. The multiple 105 kg category USAPL Record Holder looks incredibly strong, and will definitely be one of the heavy favorites in the competition. Ashton posted a training total that came out to be 960 kg (2116 lbs), which is heavier than his current competition PR.

A big part of the total was a mind-numbing 370 kg (815 lbs) squat. Ashton’s squat looked very exhausting, and even though he had constant movement throughout the rep, it took a few seconds to lock it out. Ashton stated that his current bodyweight is below 105 kg, but did not specify exactly how much he weighs.

Ashton’s recent training total is 5 kg heavier than his competition’s best, and he still has 2 weeks to prepare. He is an experienced lifter, so there is no doubt that everything will be dialed in by March 5th, 2022. Ashton gained valuable experience by taking part in 35+ competitions and failing to win only 7 times. He also has a streak of 11 wins, which soon could be 12.

It is hard to believe that Ashton is just 24-years-old, but he started his powerlifting career at 15-years-old. His greatest success is winning the 2014 World Sub-Juniors & Juniors Powerlifting Championships and becoming a 5x USAPL Raw National Champion.

We will see what kind of a performance Ashton will put up at the 2022 Arnold’s, but soon enough we could see him getting closer to a 1000 kg (2204.6 lbs) official total. He is already considered one of the most elite powerlifters, and strongest pound-for-pound squatters in the world. Judging by his training videos, it will definitely be interesting to see him compete in two weeks.