The barbell rear delt raise is an effective shoulder exercise that also works several muscles of the upper body and helps with posture. In this guide, you'll learn how to incorporate it into your workout regime. 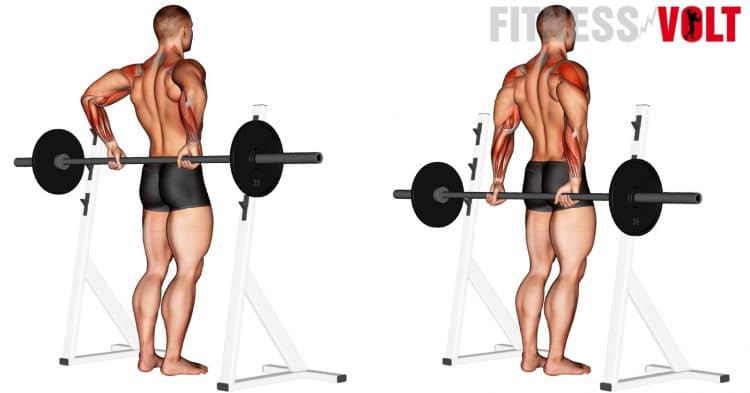 The barbell rear delt raise is a unique, underrated shoulder exercise that still deserves a place in your workout routine. It works several muscles of the upper body and is a great option for really loading the muscles that make up the shoulder girdle. Although, its primary purpose is to build the posterior or rear deltoids which play an important role in the roundness of well-developed delts and maintaining good posture.

We put together some useful information on this exercise which includes muscles worked, exercise instructions, variations, and how to include it in your training.

Here’s a guide to the barbell rear delt raise…

How To Do The Barbell Rear Delt Raise Show

The biceps is a two-headed muscle located on the front of the upper arm. It flexes the elbow and rotates the forearms.

The brachialis is located beneath the biceps on the outer portion and is a pure elbow flexor which means it can facilitate this action at any hand position. Although, it has a mechanical advantage during non-supination.

The deltoid posterior is the backside shoulder muscle that along with the anterior head, stabilizes the arm during arm abduction (away from the midline of the body). The posterior head works with the latissimus dorsi or lats, to extend the arm when walking.

It also, along with the other heads, helps to prevent displacement of the glenohumeral joint when the arm is adducted under a weight load.

The deltoid lateral is located between the anterior and posterior deltoid heads. The lateral deltoid head assists in raising the arms away from the body at 15-100 degrees while the other two heads stabilize the arm.

That’s why lateral raises are the most common exercise for building this muscle. But it’s also involved in rear delt focused exercises.

It also assists in movements such as neck extension, ipsilateral rotation, and lateral flexion.

The trapezius upper fibers are responsible for the elevation and upward rotation of the scapula in addition to neck extension.

Wrist flexors help to flex the wrist which is essential for being able to perform certain exercises more naturally while allowing for a larger range of motion.

The barbell rear delt raise can be an awkward movement compared to common exercises that we do on a daily basis. So, we’ve provided the step-by-step instructions to help you perform it safely and correctly.

Note: we recommend using lighter weights at first to ensure you’re performing the exercise correctly. Then you can increase the poundages as you become more proficient with this exercise.

Here’s a video example of the barbell rear delt raise…

To keep things simple (because this exercise is already awkward enough), we chose three effective variations that you can do.

This is a must-have variation for building the rear delts. It may be even more challenging but it really hammers the rear delts like no other. Not to mention, you’ll get a little tricep action in there too.

To do this exercise, you want to set up as if you were doing a deadlift while keeping your arms straight. You’ll then raise the bar up behind you and squeeze the rear delts. You should use an empty bar, at least at first. But even as you progress, you’ll still likely not be able to use a lot of weight.

Here’s a great video that shows how it’s done…

We always have to offer the dumbbell variation just because dumbbells are a must-have training tool. And you can do most exercises using dumbbells that you could with a barbell.

Plus, using dumbbells allows for a free range of movement, different hand positions, and it requires more total body stability, coordination, core activation, and it allows you to identify a potentially weaker side which is actually very common. Go light with the dumbbells, perfect your form, feel the muscles working, and then if you decide you want to step it up, grab the next weight up.

Can’t have a list of variations and not include cables. The beauty of cables is that there are a variety of attachments that you can use and there’s always tension regardless of body/arm position.

The rear delts are often a neglected muscle group possibly due to a few reasons. Many times we leave them out because we can’t see them and we forget about them, or we think they receive enough stimulation on back day, or maybe you just don’t care to do a few extra sets for the rear delts.

None of these are good reasons to skimp on rear delt training. In fact, because the rear delts are often underdeveloped and because they are essential to good posture, you can get away with training them a little more than other muscles.

Of course, you don’t want to overtrain them but this isn’t likely to happen for most people. Doing more rear delt work will only benefit you both aesthetically and functionally.

We recommend doing 3 sets of the barbell rear delt raise when you train shoulders, in addition to your other exercises. And, because the rear delts usually don’t get the attention they deserve, you may even benefit from adding in a few extra sets on back day or another training day.

But the most important thing is that you train them directly.

The barbell rear delt raise can take your shoulder gains to the next level. You can’t get that cannonball look without developing your rear delts and we think this is an excellent exercise for this purpose.

So, we hope this guide was helpful and now you have enough knowledge to effectively include this movement in your shoulder training regime.

Thoracic Extensor Exercises for A Stronger Upper Back

When it comes to back training, most exercisers focus on their lats, rhomboids, traps, and erector spinae. This makes a...

Your shoulders are probably your most noticeable body part. Whether you are wearing a suit, t-shirt, or workout vest, good...

The cable lying triceps extension should be a staple in anyone's triceps training regime if possible. The advantage of this...

The barbell wrist curl is a great isolation exercise for pumping up your forearms. Many exercisers neglect training the forearms...

The barbell overhead squat is an incredibly beneficial total-body lift that challenges many areas of physical performance such as strength,...