Free Weight Barbell Squat Vs. Smith Machine Squat: Which Is Better For Gains?

Is there a best method for building massive legs? 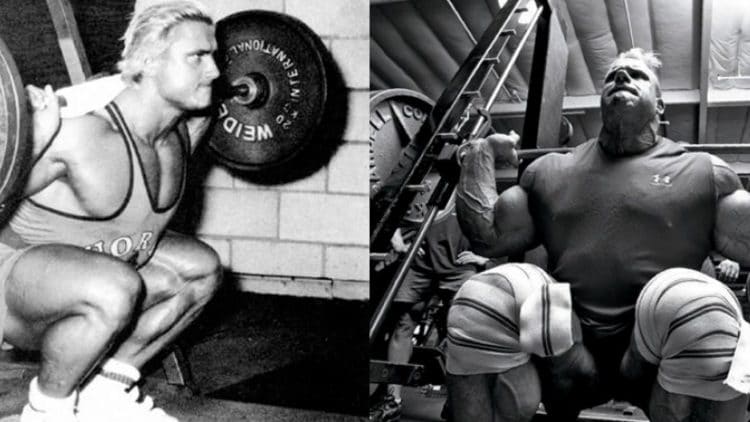 However… we’re only going to discuss two of them today to make a full comparison. So, first up to bat is the free weight barbell squat (Deemed the king of lower body exercises) followed by the Smith machine squat.

Now, we know free weight squats build more stabilizer muscles since there’s a lot of balancing and using additional muscles. But with the Smith machine, you don’t have to do much but focus on lifting the weight because the machine keeps your body balanced and locked in place. (1)

But, you’ll really only see athletes and bodybuilders doing free weight squats… so this must mean they’re the best… right?

Well, it’s not quite that simple, so let’s compare the two. But first, let’s go over the benefits of the squat…

Many studies have shown squats to improve athletic performance and they’re even beneficial for daily activities requiring lower body function. (2)

But athletes can benefit greatly from squats because they greatly increase performance due to the force generating potential of the muscle being trained. So when you train a muscle to be bigger, stronger and more explosive; the muscles power capabilities increase, therefore resulting in better overall athletic performance.

Squats also play a role in preventing sports-related injuries and they also improve core strength which is necessary for stabilization. (3)

But, of course, you also have the obvious muscle hypertrophy and strength building benefits as squats maximize both when performed with high intensity and consistency.

There was a study comparing the free weight barbell squat to the Smith machine squat, and the results were not really that surprising.

Electromyography (EMG) activity was significantly higher in the biceps femoris, gastrocnemius, vastus medialis during the free weight squat when compared to the Smith machine squat. (4, 5)

And although there was no difference for any other muscles between the two exercises, the free weight squat averaged 43% more EMG activity overall. (4, 5)

This study sums up the vast majority of similar studies and therefore it can be concluded that the free weight squat is far superior for overall effectiveness.

So… if the free weight squat is so much better overall, then why even bother with the Smith machine?

Don’t count out the Smith machine just yet as there are a place and a time for it. In fact, by utilizing the SMS, you can use more varying angles and the fact that you don’t have to worry about stabilizing the weight is a great benefit of the SMS.

But the biggest surprise when comparing the two training methods is that a study actually showed 1-rep max to be higher during the Smith machine squat when compared to the free weight squat. And this is due to only having to focus on the lift, while balance and stabilization is a non-issue. (6)

But also, since you can place your feet farther out during a SMS; this may result in more glute and hamstring activation than during a FWS where the feet are naturally closer to your center of gravity. (6)

Another great reason to include the SMS is that you can isolate one leg because you’re fully balanced. But, people who are rehabbing an injury will also benefit from the SMS as well as those who have balance issues.

Free weight barbell squat – For the FWS you unrack the barbell with your traps and take a few steps back which requires stabilization and balance. Then for the actual movement; you have to keep the weight aligned with your center of gravity from head to toe.

You’ll then squat down to parallel or below with your feet slightly in front of you so your quads will bare most of the weight load.

Smith machine squat – With the SMS you unrack the bar exactly as you would for a FWS but you don’t have to take any steps or balance the weight. You simply position your feet to the desired position and focus on the squat movement.

But, the only way to perform this exercise safely is to place your feet slightly further out in front of you because keeping them too close to your body is not safe for your knees since you’re in a fixed position. You’ll squat to parallel or just below like a conventional squat.

Training too heavy can cause back injury or excessive spinal pressure which is detrimental to your structural health. So, it’s recommended to train with a weight that you can perform moderate to higher reps with to ensure optimal safety.

The best possible squat position is one where the weight lifted is supported by your center of mass without compromise. This also ensures maximum performance potential, resulting in the best possible results. (7)

Squat depth is completely subjective based on the individual’s body type and training goals. Some people do not have much mobility in the hips and joints and therefore partial reps are the only option. (8)

But the good news is partial reps are very effective for training the legs, however, the deeper you can squat, the more EMG activity in the target muscles. (9, 10)

So, squat depth varies for each person and there’s no one best option for individualized training based on several structural factors.

So, Which is Better?

The studies are pretty cut and dry so there’s no point in trying to dissect each exercise to the bare bones.

The free weight squat is better overall for muscle activation of all leg muscles during the lift, but the Smith machine squat might be better for activating the glutes and hamstrings. And the SMS has also been shown to allow for a greater 1-RM when compared to the FWS.

So, if you don’t mind stabilizing the barbell during a squat session, then go with the free weight squat. But if you prefer to train in a fixed position and like to max out on weight then the Smith machine might be your answer.

Both the FWS and SMS serve different purposes but which to choose depends on your goals and training preferences.

Commonly criticized for not being a freeweight squat, Smith machine squats deserve more respect for what they offer in the...

A Smith machine is one of the most common resistance training equipment found in gyms around the world. It consists...

Just as the car is more efficient than the horse and cart, some machine exercises are better than their freeweight...

A lot of exercisers put more time and energy into their upper body workouts than training their legs. Some people...