Learn everything there is to learn about the Smith machine bar. 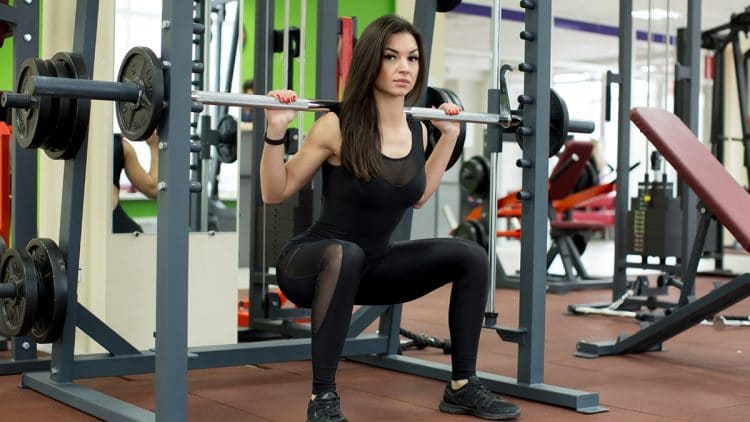 A Smith machine is one of the most common resistance training equipment found in gyms around the world. It consists of a barbell fixed within steel rails, allowing only vertical or near-vertical movement.

A Smith bar has two hooks, one on each side, allowing you to lock the bar in place on a series of lockout points. A Smith machine is used by beginner, intermediate, and advanced lifters alike.

It is one of the most effective training equipment. However, it routinely gets flake from the hardcore strength sports community for being a machine generally used by weak and lazy lifters. But why does the Smith machine get so much hate, you ask?

Unlike Olympic barbells, Smith machines come in various shapes and sizes. But before we get into the nitty-gritty of how much a smith machine bar weighs, let’s talk a little about the machine, shall we?

Have you ever wondered why the versatile training equipment is called a “Smith” machine and how it came to being?

An American fitness and nutrition guru, Jack LaLanne, in the 1950s invented the original model of what became the Smith machine. He rigged up a sliding apparatus in his gym in the 1950s. LaLanne also designed the first leg extension machines, pulley machines using cables, and weight selectors that are now standard in the fitness industry.

Rudy Smith spotted LaLanne’s ingenious invention and commissioned Paul Martin to improve it. Smith installed the new and improved model in a gym he was managing — Vic Tanny’s gym in Los Angeles, CA. By the late 1950s, Smith became an executive in Tanny’s chain of gyms, and the Smith machine was being manufactured and sold in gyms around America.

Why are Lifters Critical of the Smith Machine? Plus, while lifting heavy on a Smith machine, a slight mistake can put unnecessary tension on your joints, putting you at risk of an injury.

Secondly, free weights like the barbell and dumbbells have an element of risk attached to them. Lifting extremely heavy using a barbell is like riding a rollercoaster without a seatbelt — you could get hurt, but for most lifters, the thrill is well worth it.

On the other hand, a Smith machine acts as your personal spotter. While it is one of the biggest benefits of using the machine, especially for people who train alone, it also brings backlash.

The Smith machine bar is attached to a rail system and has pegs every couple of inches where you can lock the bar in place and get out safely in case you fail during a rep.

Finally, most Smith machines come with a counterbalance — meaning the machine helps you in the concentric part of the lift. Additionally, the counterbalance and ultimately the Smith bar weight can vary depending on the manufacturer and model of the equipment.

Three 45-pound weight plates on each end of a Smith machine bar sleeve do not necessarily equal 315 pounds. Unlike the seven feet 45-pound Olympic barbells, some Smith machine bars (with counterbalance weights and angled motion) can weigh between six to 52 pounds.

Check Out: Free Weight Barbell Squat Vs. Smith Machine Squat: Which Is Better For Gains?

How Much Does a Smith Machine Bar Weigh?

The Smith machine bars can weight somewhere between 7lbs – 30lbs depending on the material type, counterbalancing, construction, and the angle of the rails.

By now, you probably know the answer to the above question isn’t simple. To figure out how much the Smith machine bar at your gym weighs, you need to assess the mechanics of the machine.

In this article, you will find the bar weights of some of the most common Smith machines used in commercial and home gyms and also a way to reliably weigh the Smith bar you have access to at your home or gym.

Tip: If you’re unsure about the weight of your Smith bar, you should begin by checking for a label on the machine, as many brands label the weight of the bar on the side of the equipment. Nonetheless, you will find the bar weight of most big-name Smith machine brands on this list. 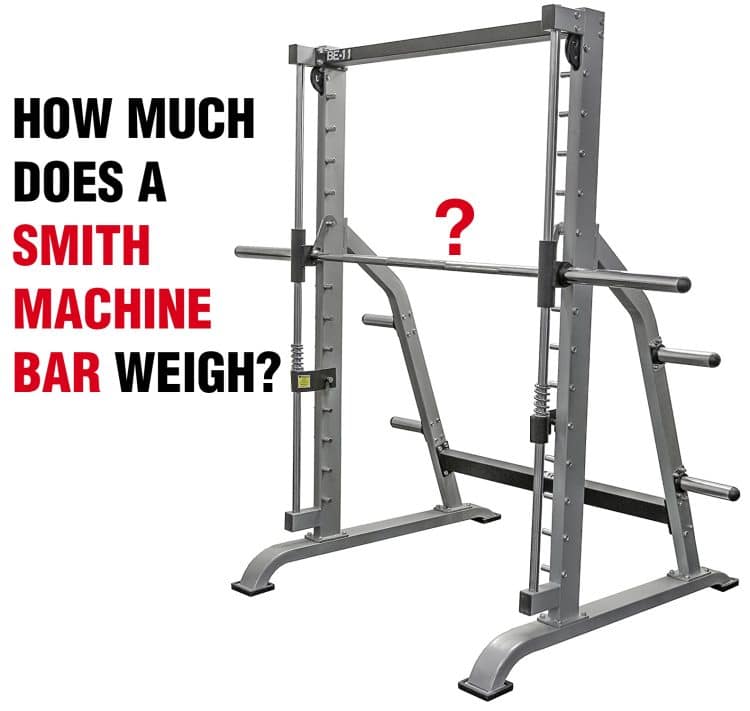 The following factors contribute to a bar’s weight:

Smith bars are made with a different type of steel compared to the Olympic barbells. Olympic barbells are designed and built using high-strength (and heavy) steel as they have to handle extremely heavy weights and need to have a whip (flex) to them.

Smith bars are a different ball game altogether. The steel rails, bearings, clamps, and slides reduce direct stress placed on the Smith bar. It also reduces the need for the bar to be as heavy as Olympic barbells.

When it comes to the length of the bars, most Smith bars have the same seven feet length as their Olympic counterparts. However, the diameter of the bars can vary depending on their utility. 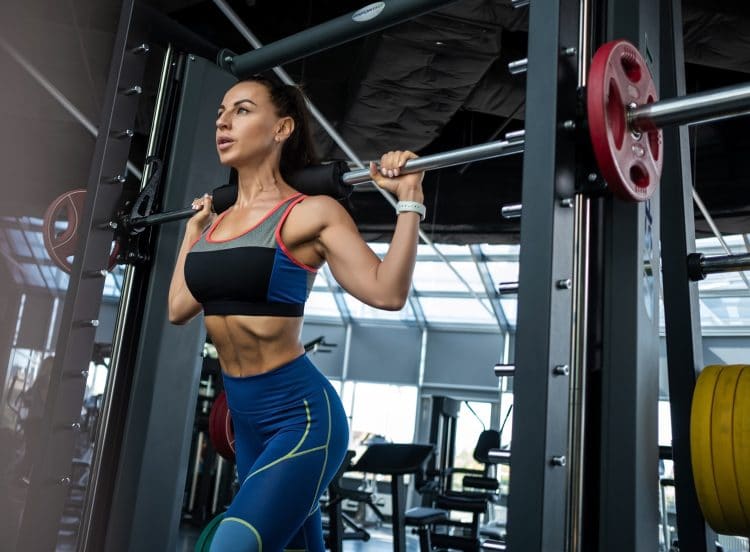 Some Smith machines use counterbalances, meaning even if the weight of the Smith bar is 40 pounds, the counterbalance mechanism will set off some of it.

What is a counterbalance, and how does it work?

A Smith machine counterbalance works like a balancing scale. The bar is on one side of the machine, and the weights are on the other (generally concealed).

The Smith bar always weighs more than the counterweight. For example, if the bar weighs 40 pounds, the set of weights on the other end will weigh 20. This makes the bar feel lighter, especially on the concentric part of the movement — the upward movement while returning to the starting position during a squat.

To experience the phenomenon, try squatting or bench pressing with an empty Smith bar. You will feel that the bar flies up the top of the Smith machine at the slightest touch.

Each manufacturer has a different way of counterbalancing the Smith machine.

3. Angle of the Rails

While some Smith machines have vertical steel rails for near-vertical movement patterns, others come with a slight incline. The angeled rails mimic the natural movement path for compound exercises like the squat, bench press, and shoulder press.

Commercial Smith machines generally have a seven to 12-degree incline, whereas most residential Smith machines move straight up and down. While the slight incline offers a more natural movement pattern, it also impacts the weight of the bar. Vertical Smith machines will put the highest resistance on your target muscles.

Notably, the impact of the incline on the bar’s weight is close to minimal. For example, a 12-degree incline may only make the Smith machine bar feel one to two pounds lighter.

Smith Machines can be categorized into two sections — residential and commercial. Here are the main differences between the two:

How To Measure A Smith Machine Bar Weight Yourself

If you cannot find the weight of your Smith machine bar on a label, on the list above, or on the manufacturer’s website, there are three ways to measure the bar weight yourself:

This option is even easier. All you need are a plyobox and a weighing scale. The box is used to bring the scale in the Smith bar’s range of motion as it generally has several inches of free space from the floor to where the bar’s lowest position starts.

This is probably the easiest, most convenient, and most accurate way to measure a Smith bar’s weight. All you need for this is a hanging scale, also known as a fish scale.

Should I consider the bar weight while using the Smith machine?

Make no mistake, a Smith machine’s bar weight is true weight. The Smith bars weigh between six to 52 pounds, and there is no reason why you shouldn’t consider them.

Is knowing the bar weight while using a Smith machine necessary?

Would you lift a dumbbell for a working set without knowing how much it weighs? Knowing the bar weight is important if you want to build muscle mass and strength by progressively overloading your muscles. Knowing the bar weight can also help you figure out your starting weight on the first set of an exercise more accurately.

Do Mr. Olympia champions use a Smith machine?

This is a common question — and a legitimate one too. Mr. Olympia champs are considered the best bodybuilders in the world. Bodybuilding and fitness aficionados follow their diets and training routines closely. An endorsement by the bodybuilding titans can certainly make their followers use the machine.

The three-time Classic Physique Olympia champion, Chris Bumstead, calls the Smith machine a “godsend” and incorporates it in almost all his workouts. If a Mr. O. winner swears by the Smith machine, what is stopping you from adding it to your workouts?

Smith machines are seeing wide adoption in professional training routines, and many lifters turn to the training equipment to achieve better muscular stimulation and pumps.

A smith machine also reduces a bodybuilder’s chances of getting injured during training by stabilizing the lift. To sum it up, the pros of using a Smith machine far outweigh the cons, and you should absolutely include it in your training regimen.

Just as the car is more efficient than the horse and cart, some machine exercises are better than their freeweight...

A lot of exercisers put more time and energy into their upper body workouts than training their legs. Some people...

The barbell front squat is simply one of the best compound leg exercises that you could ever do to build...

Leg extensions are a very popular exercise. Unlike the squat, lunge, and leg press, the leg extension is an isolation...