Big Ramy is set to finish off his 2021 Mr. Olympia prep by training again with Dennis James 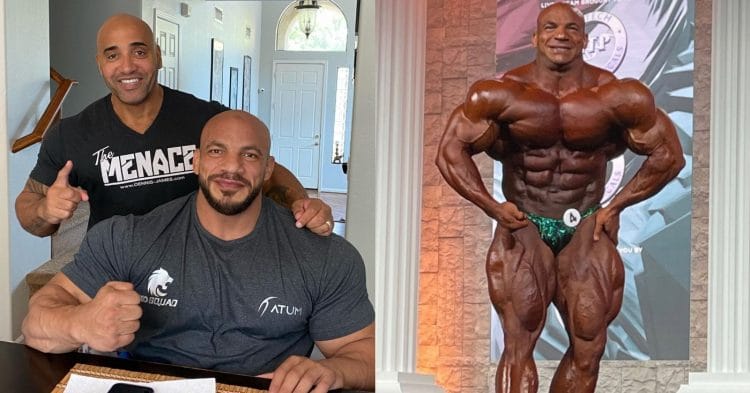 They say that when a bodybuilder has the formula to win the Olympia, they should just repeat it. That seems to be the approach Big Ramy is trying, as he is going to be working with Dennis James for the final stages of prep, in an attempt to defend his title.

A few days out from the Olympia last year, Ramy decided to finish out his prep with James, while staying at his house. This turned out to be a great decision, as Dennis helped him stay on track with his training, which led to an insane physique that was enough for the Egyptian to win.

It appears that he is going to be doing this again this year, according to a post to Instagram from Dennis. Here he was seen standing with the champ, a little less than five weeks out from the 2021 Olympia, saying that he was there to work on finalizing his prep for what he hopes will be the first of many title defenses.

By all accounts, this was a really great decision for Big Ramy to make, considering the effect that Dennis James had on his physique last year. Both men have been honest about the fact that Dennis was able to keep the Egyptian on track with his cardio, even when it was hard, which led to the insane conditioning that was present on stage.

On top of that, the fact that these two are teaming up with so much more time before the contest this year makes things even more exciting. It is now impossible to not wonder what kind of package will be brought to stage, when they make it to Orlando, Florida, to compete from October 7th-9th.

It seems that Ramy is getting right to work, too. Dennis posted in his Instagram Stories when picking up the champ from the airport, then a short time later he was already hitting the treadmill for some hard cardio work.

With Big Ramy getting right to work under the helpful tutelage of Dennis James, it will be exciting to see what kind of improvements he has made to his physique this year. He is going up against a tough lineup of competitors at the 2021 Mr. Olympia, but he is absolutely looking ready to either defend his title, or go down fighting.