After landing in the United States, Big Ramy gets in intense training session with Dennis James who is coaching him 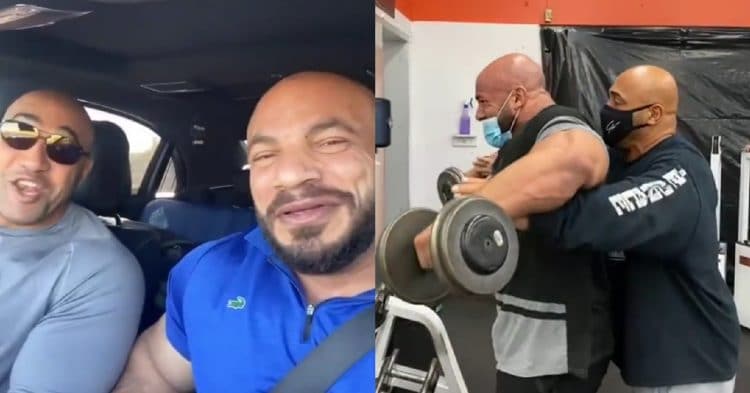 When Big Ramy arrived in the United States he was greeted by bodybuilding legend Dennis James. Now with just over two weeks until the 2020 Mr. Olympia, the pair have begun their work together and look like an unstoppable duo.

There was a little bit of a mixed reaction when 2017 Olympia Runner-Up Ramy was given a special invitation to this year’s contest. However the general consensus is that he was deserving of this, and that he would be an asset to the competition. He has one of the most insane physiques in the sport today, and he will only elevate the level and motivation of the others going against him.

When Big Ramy arrived in the United States the excitement was palpable, as it began to sink in that he was going to be competing at the 2020 Mr. Olympia. However he is not by himself in the lead-up to the contest. Picking him up from the airport is bodybuilding veteran Dennis James, who will be helping the Egyptian in the final steps of his prep for the contest. It was not long after this, that the two were seen in the gym pumping iron, and absolutely destroying a crazy shoulder workout that saw Ramy do a side lateral marathon, using almost every dumbbell in the gym.

“I want to give you guys a sneak peek, so you don’t think we’re not working,” James said after Ramy completed the workout that he streamed on Instagram. “He is working his ass off, and that’s exactly what it’s going to be all about, giving it all. I’ll take his soul, and hopefully he can take the title.”

This was a crazy workout from Ramy and James. It is clear that they will be spending the next two weeks before the Olympia, with their nose to the grindstone and putting their all into the final stages of prep. There are still some unanswered questions about his conditioning, especially with the relative short notice of his special invitation. However he has promised that he has never been better and assured his fans that he will be peeled this year, which seems to align with the work ethic we are seeing here. James has said that Ramy is doing two cardio sessions a day to get as vascular and conditioned as possible, and this appears to be true.

If Big Ramy is able to come at his best, he will be a serious threat to the Mr. Olympia throne. It is going to be surreal to see him on stage alongside the likes of Brandon Curry and Phil Heath this year. He has always been one of the most genetically talented bodybuilders out there, but time will tell if he can put it all together for this year.