Tia-Clair Toomey breaks down her favorite stretches to use, to avoid injury whole doing squats 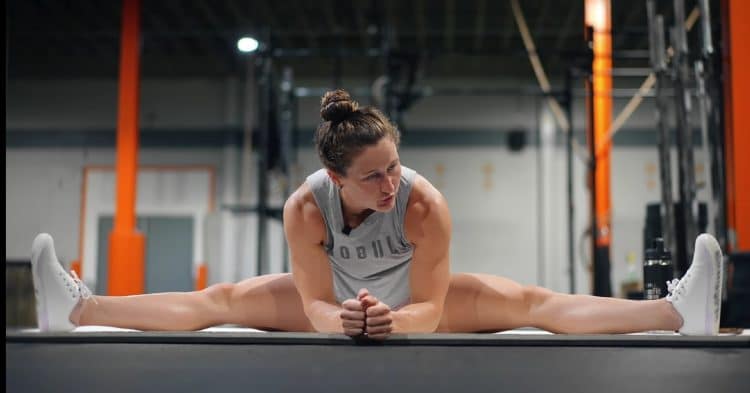 As the five time Fittest Woman on Earth, Tia-Clair Toomey knows how important it is to stretch before a workout. She recently shared some of her favorite stretches that she uses, when she is trying to avoid injury while squatting.

Toomey is arguably the greatest fitness athlete to ever walk the planet, as she continued to prove with her reign of dominance at the 2021 CrossFit Games, winning her fifth straight contest. Before this impressive run in CrossFit, Tia was a weightlifter of an Olympic pedigree, and is even trying to return to the Olympics through the sport of bobsledding.

No matter what the sport is, Tia-Clair knows the importance of getting a good stretch before participating in the physical activity, in order to avoid injury. So she recently posted a video to her YouTube channel, where she broke down some of her favorite stretches to use to avoid getting hurt, particularly when it comes to squat day.

There are four main stretches that Toomey does to warm up and get limber when she is preparing to do squats. These primarily focus on the mobility of the ankles and lower back, and the looseness of the knees and hips, in order to get the most out of her squat, while minimizing the risk of injury.

The first stretch was the low dragon, which sees Tia-Clair Toomey in something of a lunge position, staying relaxed while bringing the knee over the toes and keeping the heel flat on the floor, being held for two minutes. She says the purpose of this is to stretch and loosen both the calf and the ankle.

Following this, Tia-Clair proceeded to the quad lean, which has two variations that one can do, based on their mobility. The movement sees her sitting on her ankles, before using her arms to brace and lean back for two minutes, but if you are not flexible enough to do that with both legs under you, she recommends the “half saddle” position which involves keeping on leg stretched out.

The third stretch that Toomey does is the lizard, which is similar to the low dragon, but focuses on hamstrings over the ankles and calves. Starting from that same lunge position, she sticks the knee out to one side, and brings her elbow as close to the floor as possible, lining up the knee with the shoulder, and holding it for about two minutes.

Last but not least, Tia warms up her groin and lower back with the straddle stretch, before heading to the squats. This has her sitting with her legs out to the side and leaning forward to bring her chest as close to the ground as possible, but she advised leaning on a foam roller or exercise ball if your flexibility is not accommodating.

Tia-Clair Toomey makes it clear throughout the video that the biggest keys to success when it comes to stretching, are breathing throughout and not pushing yourself further than your body can handle. With those tips, and these four stretches, anyone can get a smooth warm-up in before a workout.

Your body is made up of over 600 muscles. Some of those muscles are HUGE, like your gluteus maximus. That’s...