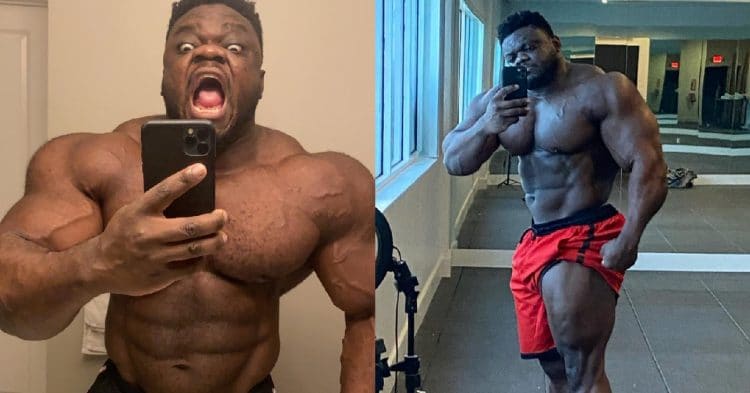 Few bodybuilders have as much anticipation for their pro debut as Blessing Awodibu. Now as he prepares to finally make that happen, he looks to be in tremendous shape.

By all accounts, Awodibu should have long since made his pro debut. The fan favorite bodybuilder has one of the biggest physiques out of anyone who is this early in their career, and it has made people hyped about seeing how he does in the pro ranks.

Blessing was planning on debuting last year, at the Arnold Classic Australia, but that went by the wayside after the global pandemic canceled that show on short notice. He told Fitness Volt a few months ago that he had shifted his attention to the 2021 Arnold Australia to have his first pro contest.

Yet with this show being pushed back to the fall, Blessing Awodibu has decided to make his pro debut a little earlier. Taking to his Instagram, the massive bodybuilding talent revealed that he is kicking off his prep to compete in 16 weeks, at a show that he did not reveal the name of.

On top of that, he showed off his shredded legs that look absolutely massive. At the same time, he revealed a hefty bodyweight of 287lb as he kicks his prep into gear.

We should be very clear in saying this: Blessing Awodibu is absolutely massive. Currently it does not appear that he is the most conditioned, but as the show draws closer and he leans down, the conditioning should follow.

He has been spending this downtime bulking up the best that he can, while keeping his body fat low. Now he is looking to cut down on that excess weight and shrink his waist as he gets shredded for competition.

Hopefully nothing is going to get in the way this time, for Blessing Awodibu to take the stage as a pro bodybuilder for the first time. There is a lot of anticipation for this moment, and it would be unfortunate for it to be delayed again.

It is still very early on in the prep, and we are not even sure where he will be competing, but so far it seems that he has the potential to deliver something special. When the time comes, it will be exciting to see it go down.