Five-time Fittest Man on Earth® winner Mat Fraser met up with record-breaking powerlifter Stefi Cohen to talk his favorite thing besides CrossFit and his fiance: food. 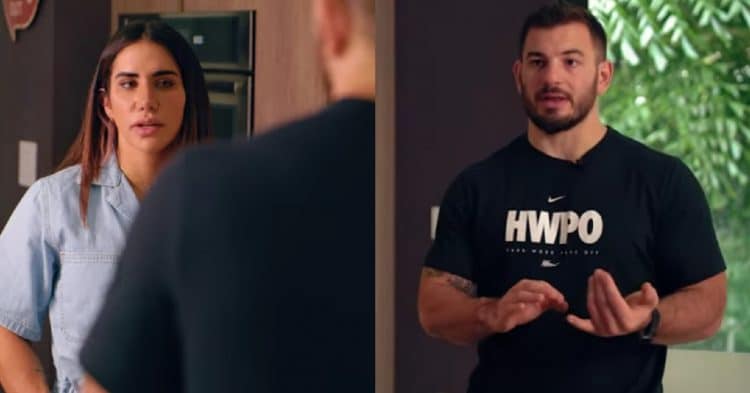 Five-time CrossFit title holder for Fittest Man on Earth® winner is using his pre-2021 CrossFit Games time to catch up on some interviews with media. This time it was with Stefi Cohen, a world-renowned record-holding powerlifter who was the first woman to lift 4.4 times her bodyweight. In this video, she checks in with Mat Fraser to talk about his nutrition and dieting tips.

Her first question involved bad diets. She started the chat by asking him if someone could “outwork a bad diet.” Mat Fraser said yes, it’s very common to outwork a bad diet. He said anybody can workout a little harder after eating a brownie or a cookie, it’s common and the mindset that sends most people to the gym.

“To a certain extent. Train hard, have a few treats. I tried really hard when I first got into the sport, I wanted to prove really hard that you can out-train a bad diet. Then after a while, I thought, why am I doing this? This is only a detriment to myself. My body isn’t performing the way it’s capable of..and what for?”

He described it as a snowball effect. He said once you start putting effort into a certain area, the snowball grows. For 5-time Fittest Man on Earth that meant changing his diet a little bit to see improvement in certain areas.

Mat Fraser was asked if he ever had struggles with bodyweight. Stefi Cohen wondered if he ever reached a point where he felt uncomfortable.

He said he struggled with body image, but not necessarily weight.

When he first started competing, his body weight fluctuated between 170 and the low 200’s.

He says compared to other competitors, it makes a big difference for his game.

“By day 3 or 4, these guys that have incredible abs, they don’t have the fuel. Their body is literally eating their bones. It looks like their performance is even keel, while mine is spiking up right up to the last day. In my mind, I’m looking at it like mine is staying even-keeled while theirs is dropping. They don’t have the fuel storage.”

But he adds with a laugh, “But….it would be cool to have abs.”

Looking Good is Not The Priority

Mat Fraser described intentions for workouts. He says most people get into CrossFit or any sport to look good and feel better about their bodies. He says that’s natural and that’s just being human. For him, it’s a little different, as his eating habits are performance-driven, even in the off-season.

When it comes to eating for performance or eating to look good, he doesn’t think about the “looking good” part of things. When he was a weightlifter, all he cared about was being strong, not, looking strong. That mindset has transitioned into his successful CrossFit career.

During competitions, he is actually focusing on eating and it isn’t as fun as it is for him in the offseason. We previously reported on a Mat Fraser interview where Mat Fraser said that in the offseason, eating for him feels like being a toddler in a grocery store where he can eat whatever he wants.

During a comp, he has to force himself to eat constantly to keep giving his body whatever fuel it needs to succeed.

Fueling his body is something he is always thinking of. If he’s doing a long training session over 90 minutes, he will keep a pile of snickers beside him to just keep the energy going. Then, as soon as he’s done, he’s taking in calories in liquid form, like with Gatorade.

He says he recovers off of that and it’s great for his performance.

When asked what his cheat days look like, Mat says he doesn’t really have cheat meals, but he struggles with moderation, although, not for more than a few weeks a year. But he has a large drawer at home full of chocolates, like Reese’s Cups or chocolate truffles. He allows himself to have two chocolates a night and that’s his treat.

He also loves pastry. He says in the offseason, his fiancé Sammy will bake cinnamon rolls. He says he can’t eat just one, and says done eating when they are all gone.

He does find himself slipping on his diet,

In season length is about 8 to 10 months for him, and he focuses on whole foods. As soon as the CrossFit Games are done, he goes overboard and binges. Stefi Cohen asked him when he knows he’s gone too overboard and needs to get back to good eating.

“My trigger is when I think, ‘I would love a salad right now.’ I feel bloated, I feel gross, I get excited about wanting to eat healthy again…it’s when I start not enjoying it anymore…it’s…time to get back into the gym.”

How Mat Fraser eats during comps as opposed to training is different as well.

“Our competition days are like…sometimes they start at 4 am and sometimes they end at 10 pm. In the morning I try to keep it fairly basic, like a breakfast burrito….at night it’s hammering in as many calories as I can…tacos, pizza, burgers, anything.”

He also said that Sammy sends him to comps with a stack of peanut butter and jelly sandwiches, turkey sandwiches, rice bowls with meat and vegetables.

He does think about how food can impact him during competition. He avoids spicy foods and even foods that might make him burp during a competition, or something that could burn his nose, which could cost him some success or a first-place finish.

“During competition, I avoid anything spicy, you know I’m thinking about things as simple as, if I burp, is it going to bother me. In competition, it is bland food. I’m not eating for flavor or enjoyment or anything, I’m eating only for fuel.”

To close, Stefi Cohen asked Mat Fraser some Rapid Fire questions. They were all related to his personal favorites in food. This is what he answered:

And that is where Mat Fraser left it off. Next time you’re thinking of sneaking in a brownie or chocolate truffle, know that the five-time Fittest Man on Earth® winner is doing exactly the same.