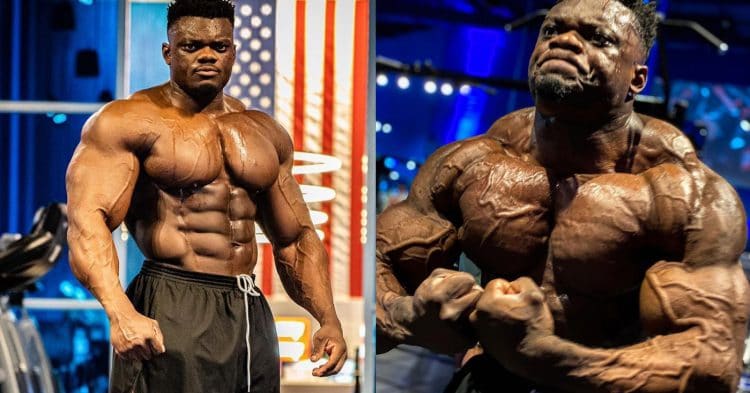 For someone who has not even made their pro bodybuilding debut, Blessing Awodibu has already garnered quite a following. Speaking exclusively with FitnessVolt he explained when he expects to make that long awaited debut, his social media influence, motivations in the sport, and much more.

At 28 years of age, Blessing is looked at as one of the most exciting prospects in the sport right now. Two-time winner of the Arnold Classic, the Irishman earned his IFBB Pro Card in 2017. However he has not competed since then, with many fans anxious to see this force of nature back on the stage.

When Will Blessing Awodibu Make His Pro Debut?

Initially the plan was for Awodibu to have his pro debut this year, at the Arnold Classic Australia. Unfortunately those plans were derailed by a global health crisis putting a halt to bodybuilding competitions. That being said, he is looking to use this added time to prepare more, and take to the stage next year.

“I’m sure you guys saw me, I was prepping, and I was going to make my pro debut this year,” Blessing said. “I was two weeks out from the Arnold Classic Australia before it got canceled due to the COVID-19. I had so much planned this year. I had plans for the Arnold Classic Australia, I was going to go to Brazil, and I was going to do a show in the UK, and maybe do one more, then hopefully qualify for the Olympia. But, you know, everything went to s–t. We all went into lockdown mode, so it didn’t happen.

“Next year, definitely I’m going to make my pro debut,” Awodibu continued. “To be honest, I see it as a blessing in disguise. This will give me more time to get better. People want to see me for the first time, of course I want to impress the judges. I want to give them that wild card, I want to look good. Pushing it to next year just gives me time to get better, to put on more mass, and now that I’m working with Chad (Nicholls), I have so much confidence working with him. I’m super excited for the future with him. I think working together we’re going to make a lot of noise.

“I’m super excited. It’s been so long; 2017. And I love competing. I love being on stage. So being away from the stage for that long it’s like…arrg! I’m just super excited to get back to doing what I love doing and hopefully we will start with the Arnold Classic Australia, if not then we’ll do the Brazil, which gives me a lot of time.”

A big portion of the people who know of Blessing Awodibu do not even follow him for his bodybuilding skills. His 1.6 million Instagram followers are full of people who are entertained by his hilarious sketch videos and great sense of humor. However he does not put much thought into being funny like this, instead finding it important to just be himself, and let the humor follow.

“The videos, for me, just come naturally,” Awodibu said. “I love having fun. I’m a poistive dude, always full of energy, even when I’m prepping. I’ve always enjoyed making people laugh, and in 2017 when I was going for my pro card I looked at social media as a way to get myself out there. Especially when you’re a bodybuilder from Dublin because you’ve never really heard of any IFBB Pros from Ireland. The bodybuilding community there is very, very small, and I saw social media and stuff as a great platform for me to get myself out there, be seen. I just let it all out, be myself and do skits and stuff, and just try to mix it all up.

“I want to be relatable,” he went on. “Not just to the bodybuilding community, but I want to be able to penetrate the other, wider range of audience, which helps me to get my followers. Half my followers don’t know nothing about bodybuilding. They’re just regular kids who enjoy a little bit of entertainment.”

“For me, its all about being yourself and not really giving a s–t what other people think about you,” Awodibu continued. “Other bodybuilders care too much about other people’s opinions, because our sport is so subjective. We’re judged all the time, on the scale. We’re judged based on how we look. In the outside world a lot of people look at us and think we’re just meatheads. For me, I never let that stop me. It all about just being yourself, and not really giving a f–k what other people think of you.”

When it comes to training, Blessing Awodibu tends to focus on his weaker areas twice a week. However his favorite body part to work is his triceps, enjoying the activation he gets from working them. This is how he splits up his week

Admittedly, Blessing feels that his legs are his weakest body part, because he used to focus a lot on upper body, so he puts extra focus there nowadays. As far as cardio goes, he tries to regularly work his conditioning two to three times a week. His prefers doing 20-25 minutes on stair master, but he will also do 5-10 minutes on a treadmill.

When it comes time to prepare for a competition, Awodibu does not change a whole lot to his training. He still trains high reps and heavy weights, with the biggest change being added cardio. Looking to maintain weight, he does 12-15 reps of his exercises, being sure not to get too big or too small.

Blessing Awodibu says he typically eats around 6-7,000 calrories a day. Of this, he consumes 400g of carbs, and 550g of protein. Eating six meals a day, he typically never has snacks or junk food. Although on his cheat days he has been know to eat some delicious ribs or sushi.

The staples of Blessing Awodibu’s Diet include

Awodibu explains that working with Chad Nicholls has really changed his approach to diet and nutrition. He says that he looks at food as fuel now, and eats with purpose. In fact he considers eating properly is more difficult than the actual training.

“If you’re looking at your food and you’re excited about it, you’re not doing it right.”

As a result of the global health crisis, the 2020 Mr. Olympia is being moved to Las Vegas. In addition to that, there are a ton of athletes that may or may not attend this event. Blessing Awodibu says he is still excited for the event, regardless of these uncertainties.

“To be honest I’m not familiar with the area (that the Olympia is moving to), but I’ve been reading and people are saying it’s a better location. I can see that many are excited about the new location, and I think it’s going to have a better stage, better lighting, and probably more space. Better accomodations for the athletes. So it’s a win-win for the Olympia, the sport of bodybuilding, and the athletes that are going to be competing there. So I’m super excited to see all the new changes.

“What I hope they do this year, maybe not this year but the following year, is a better promo. I feel like the Olympia, they need that promo! They have to sell the godd–n f–king event!” Awodibu proclaimed. “Bring something exciting!”

As for who he thinks will win the Olympia, Awodibu is undecided. That being said, he does not think we will be seeing Phil Heath or Kai Greene making a return this year. On the other hand, he does think Shame Rhoden will be able to compete.

“It’s really hard to call, man. I love Brandon Curry, I love William Bonac, and Hadi Choopan is very good. Phil Heath is probably not (competing) this year. I don’t know, maybe next year. I don’t know why he wouldn’t want to come back because that’s an easy win for him. I don’t understand why Kai (Greene) and him don’t want to compete. If I’m Kai, that’s easy money bro. Like, why are you wasting time? This is your s–t, this is what you do! This is why you’re built like a hulk, why not compete?

“I really hope Shawn Rhoden comes back. I think he’s all cleared now for the court case, I’m not sure. But whenever he comes back, he’s the man. Shawn Rhoden can do anything, and in a very short space of time. His body changes like crazy.”

Blessing Awodibu On The Death Of Luke Sandoe

It has been just over a month since the tragic suicide of Luke Sandoe. Blessing Awodibu was someone who had worked with and knew Luke. Although he admits he was not the closest to Sandoe, Awodibu was still devastated to hear what had happened.

“Luke was such a great guy, man. We worked for the same company, and we met a couple of times. We were at FIBO 2009, and it was a great time. Just me and him in the booth. It was so fun, we had a chat and I was super excited and looking forward to a lot of things with Luke. A lot of back and forth on stage with him. When he was over here, we talked about it as well. We were going to be on stage together in the UK, and I was just super looking forward to that. What happened is just so sad, and it was shocking. Rest in peace to him. He was such a good dude.”

Be sure to follow Blessing Awodibu on Instagram. It will be exciting to see him make that long awaited pro debut. He is truly one of the most intriguing prospects in the sport.