See who won this battle between Boogieman and Beast! 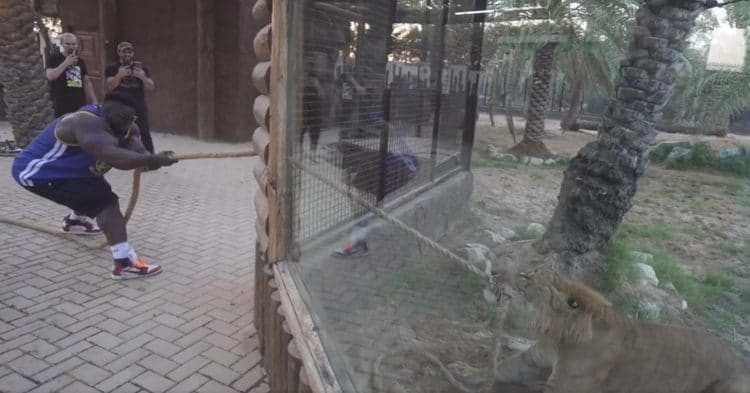 Tug of war is one of the ultimate tests of strength and there have been many instances where a human/s takes on an animal to determine the stronger species. More often than not the animal wins because, well, large animals are usually stronger than humans regardless of the human’s size.

Recently though, IFBB Pro bodybuilder Blessing Awodibu wanted to try his luck against a liger which is the offspring of a male lion and a female tiger. Ligers are considered the largest cats in the world, with males ranging from 9.8 to 11.8 ft in length and weighing 800-1,000 pounds on average. To put into perspective how large this is, an adult male tiger weighs a few hundred pounds less than this, on average.

But if anyone was going to take on this liger, it would, of course, have to be Blessing Awodibu whose larger than life personality matches his huge muscles. Plus, he’s known for doing crazy things and is undoubtedly one of, if not the most entertaining bodybuilders out there.

All in all, it was a fun moment for everyone involved but now Blessing Awodibu has to focus on making gains and preparing to bring a lights-out package in his Pro debut next year.

Bodybuilder Blessing Awodibu hopes to keep the momentum in his corner at his first-ever Mr. Olympia contest later this year....

Bodybuilder Blessing Awodibu is determined to shock the world at his first-ever Mr. Olympia appearance. In a recent post made...