Bobb Matthews mamaged to improve both his squat and bench press two-rep PRs in a single training session. 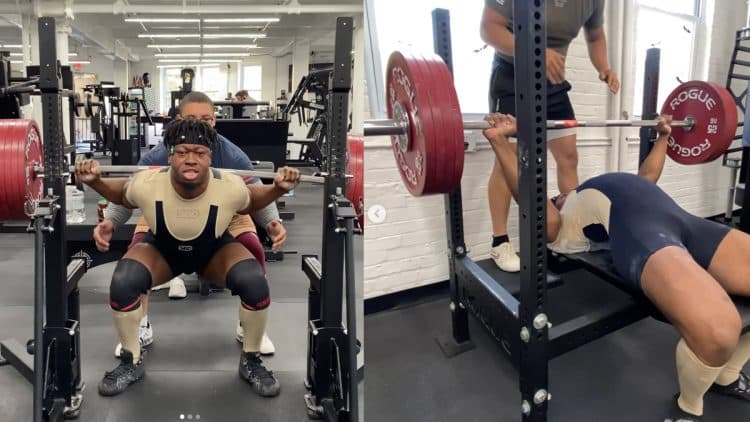 Bobb Matthews is quickly gaining recognition as a PR (Personal Record) holder, since he consistently makes progress regardless of the exercise he performs. Bobb has thus far achieved his greatest training accomplishments in the deadlift, where he was able to unofficially surpass the World Record on one occassion. Furthermore, he recently shared a duo-deadlift PR, which he completed with David Woolson. However, Bobb has now scored new squat and bench PRs as well, both of which Bobb performed in a single training session.

Bobb Matthews recently posted a video to his Instagram page showing off brand new two-rep PRs in squats and bench presses. The first of the two was the squat, which saw him perform two repetitions with 750 pounds (340 kilograms) loaded on the barbell. Bobb only utilized a lifting belt and knee sleeves to complete the squat set, making it raw.

The second PR of the day came on the bench press, as Bobb Matthews lifted 490 pounds (222.3 kilograms) for two reps. In addition, he did not use any equipment at all to help him achieve this PR.

During the same training session, Bobb Matthews also tried to set a new deadlift PR. However, his two reps of a 793-pound (360-kilogram) pull were insufficient to complete this task. Bobb attributed this to “fatigue” in the caption of his post, which is understandable seeing that he performed the heaviest two-rep squat and bench press just before it.

As can be seen from Bobb Matthews’ competition PRs below, his recent two-rep squat from training is equal to his best official squat. Despite the fact that Bobb last competed only a few months ago, his progress, especially on the squats, has been mind-blowing.

*Bobb Matthews set all of his competition PRs at the 2022 USAPL Mega Nationals.

Bobb Matthews started competing professionally in powerlifting just three years ago. Since then, he took part in six sanctioned competitions and claimed a single victory. It should be noted, however, that one victory was of great significance, as Bobb went on to become the 2022 USAPL National Champion.

There is still no word from Bobb Matthews when we can expect to see him compete, so perhaps he does not have any plans in the near future. Considering the progress Bobb has made recently, it is increasingly difficult to imagine anyone outperforming him. As a result, Bobb is now only competing against himself. Seeing that no one is even close to rivaling him in the 100-kilogram weight class of the USAPL, Bobb’s goal now is probably to break some World Records.

How to Do Kang Squat: Muscles Worked, Benefits, and Alternatives