Woolson and Matthews grabbed the barbell as a pair and managed to lock out a massive 620 kilograms (1,366.9 pounds) PR. 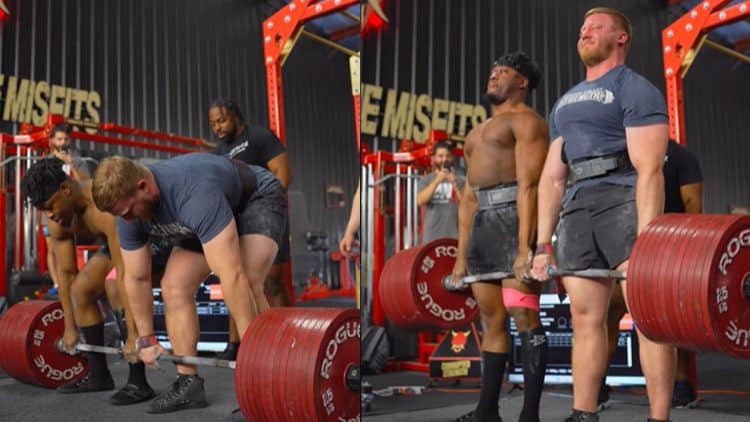 Almost everyone knows that haunting duo-bicep curl from Chris Bumstead and Calum Von Moger, which left the Australian star with a serious bicep tear. Following that, almost everyone refrained from mimicking that feat of strength, as any imbalances could lead to an injury. However, every once in a while two people decide to try it. This time two elite powerlifters decide to test their combined strength in one of the lifts they know the best. In a joint effort, Bobb Matthews and David Woolson accomplished a PR of 620 kilograms (1,366.9 pounds) as a duo.

Bobb Matthews is arguably the greatest youngster in powerlifting right now. He is quickly improving in training and is chasing after some legendary records of Ashton Rouska and others. So, if anyone was able to maintain a perfect deadlift form and avoid injury, that was Bobb. Woolson, meanwhile, is a top-notch powerlifting coach, so the two of them are well equipped to accomplish great things together.

Bobb Matthews usually uses a sumo stance to deadlift, but seeing that two men had to fit between the weight plates, he had to go conventional. Both used lifting belts, while David also opted to use lifting straps. This would have been extremely dangerous if Bobb let go of the bar, as David would have no time to react. Woolson shared their achievement on his personal Instagram account.

Bobb Matthews has really been enjoying working out in the gym lately, as his new strength improvements just keep pushing him to do more. As of right now, he weighs about 102 kilograms (225 pounds), with the bulk of his weight being muscle. Bobb has also recently been testing his strength in other unusual lifts apart from the duo-deadlift. So, he performed eight dips with 109 kilograms (240 pounds) hanging from his waist, as well as a six-rep deficit Romanian Deadlift with 272 kilograms (600 pounds) loaded on the bar.

In regard to his powerlifting career, Bobb Matthews has taken part in six sanctioned powerlifting meets. However, he just recently claimed his first victory at the stacked 2022 USAPL Mega Nationals. Bobb has not broken any official World Records yet, but he has beat the mark a few times in training.

*Bobb Matthews set all of his competition PRs at the 2022 USAPL Mega Nationals.

These lift are his best from competitions, but Bobb has already exceeded some of them in training.

Bobb Matthews has not revealed if he plans to compete again this year. However, although he is progressing in every lift, it does not currently seem that he is preparing for a competition specifically. Nevertheless, this was an impressive feat of strength that Bobb Matthews and David Woolson can brag about.