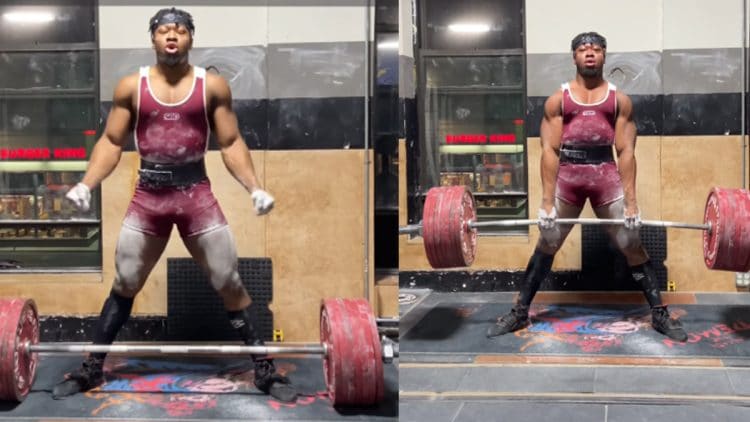 Powerlifter Bobb Matthews has made insane progress since gaining some muscle mass and moving up to the 100 kg weight class. He is now looking to become one of the greatest USAPL powerlifters in his division. It will be hard, as he will have to break Ashton Rouska’s records, but his recent outgoings in the gym make it seem very realistic. On April 24th, Bobb posted his new 375.5 kg (832.2 lbs) deadlift PR on his Instagram.

Bobb Matthews’s deadlift is considered raw by powerlifting standards, as he only used a lifting belt to aid him in the pull. His deadlifting style combines the sumo stance and a hook grip. Bobb’s pull is just 7.5 kg (16.5 lbs) lighter than the current USAPL Record in the 100 kg weight class, which Ashton Rouska set at the 2020 USAPL Virginia Winter Wrecker.

“I ain’t a (deadlift) specialist tho…”

Bobb Matthews is currently preparing for the 2022 USAPL Mega Nationals, which will take place from June 7-12, 2022, in Las Vegas, Nevada. Only six weeks are left until this competition, but it is very likely that Bobb will fine-tune his technique and challenge the deadlift record.

Bobb Matthews’s At A Glance

Bobb Matthews competed in the 93 kg weight class throughout the majority of his powerlifting career. However, he recently moved up to the 100 kg weight class, and it is doing wonders for him. He is on the verge of notching multiple World Records, and all of his PRs have been improved massively.

Bobb Matthews has taken part in only 5 sanctioned competitions and has not won any of them. His greatest performance was at the 2021 USAPL Virginia Pro, having claimed all of his current PRs and finished in third place.

The 2022 USAPL Mega Nationals could be a breakthrough competition for Bobb Matthews, and it looks like he will have the greatest performance of his career. Not only will he be aiming to claim his first professional win, but also at least one world record. Just over a month ago, Bobb Matthews scored a 945 kg (2083.4 lbs) Total PR in training, which is also just under the USAPL record. So he has at least two records within touching distance.