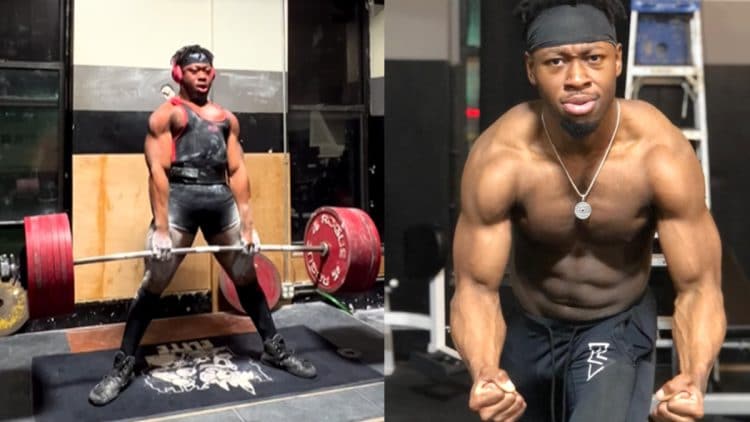 Bobb Matthews is getting noticed more and more lately as one of powerlifting’s rising stars because of his incredible training lifts. Ever since Bobb moved up to the 100-kilogram weight class, it seems like everything has aligned for him. Bobb has gotten very close to World Records on multiple occasions, but has never managed to outperform them. However, May 15th turned out to be a big day for him, as Bobb has unofficially broken the U100KG USAPL Deadlift Record with a 383.5-kilogram (845.5-pound) pull in training.

Ashton Rouska holds the official USAPL record of 383 kilograms (844.4 pounds), which he set at the 2020 USAPL Virginia Winter Wrecker. As the current record holder, Ashton Rouska seems to be gracefully accepting Bobb’s achievement, as he left a comment under the Instagram post.

“Well on your way to becoming the best to have done it.” wrote Rouska.

Bobb Matthews’ deadlift is considered raw by powerlifting standards, as he only used a lifting belt to aid him in the pull. Bobb was also utilizing a sumo stance and a hook grip. The lift did not seem too hard for him, as he even held the bar in the upright position for a very long time.

Bobb Matthews’ next competition will be the 2022 USAPL Mega Nationals, which will take place from June 7-12, 2022, in Las Vegas, Nevada. So he is in his final weeks of preparation.

Bobb Matthews has taken part in only five sanctioned competitions until now, and the upcoming USAPL Nationals could be his greatest one yet. He will be chasing his first career win at this contest and judging by his recent training performances, it seems like a realistic outcome.

Bobb Matthews is confidently marching towards his first-ever National title and USAPL record. Getting closer to the greatest powerlifter in his federation will undoubtedly energize him for the future. Only three weeks are left until the Mega Nationals, so Bobb will probably load on a few more pounds on the bar in the last few heavy training sessions.