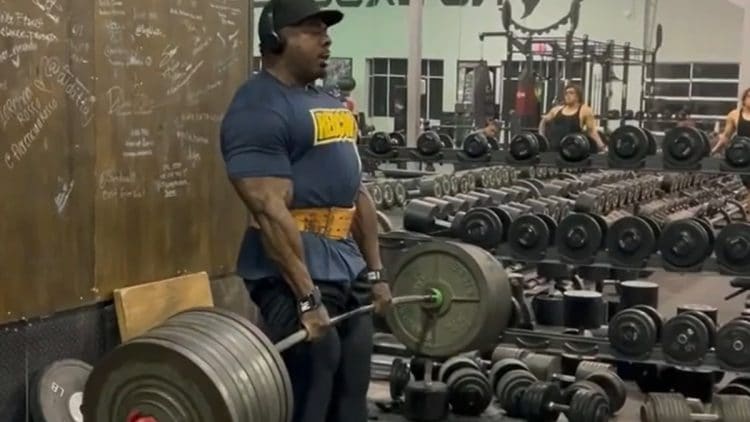 IFBB Pro bodybuilder Joe Mackey is working really hard in the gym to take his career to the next level. Mackey recently hit a massive 394.6kg (870 lbs) deadlift single in the gym that is approximately 6.8 kg (15 lbs) heavier than his last big deadlift.

Joe Mackey recently shared the video of this 394.6 kg (870 lbs) deadlift on his Instagram account. Mackey spent a while preparing to lift the massive weight off the ground. The lifter’s grind was visible as he lifted the barbell while being on wildly shaky legs. However, the IFBB Pro bodybuilder successfully led the plate-loaded barbell to a lock out before returning it to the ground with a bang. Courtesy of Joe Mackey Instagram account, you can watch the video of his 394.6 kg (870 lbs) deadlift here:

In a recent Instagram Physique update, Joe Mackey revealed his weight to be 288 lbs. This means the massive 870 lbs deadlift was over three times his body weight.

Mackey is not competing at the 2022 Arnold Classic, taking place from March 3-5th, however, he is building mass and strength during the offseason. Usually, we don’t see 800 plus pull in bodybuilding, mainly it’s a strongman and powerlifting specialty, as strength is not their main focus. Eight times Mr. Olympia champion Ronnie Coleman knows a thing or two about massive lifts. Coleman pulls 800 lbs two reps back in 2000.

Dallas McCarver is one of the bodybuilders who pulls 845 lbs in the gym back in 2016. He passed away in 2017. Johnnie Jackson is another strongest bodybuilder, started his career in powerlifting also pulls 815 lbs at the 2009 Olympia, and won the title of “World’s Strongest Bodybuilder”.

Joe Mackey is targeting a 900lbs deadlift next

Joe Mackey’s deadlifts are a part of a training schedule formulated by Jailhouse Strong. It is a training service that offers functional and strength training programs based on workout methods developed by prison inmates.

In another post after the successful 870 lbs deadlift attempt, Joe Mackey stated that his goal of becoming the ‘strongest IFBB pro at deadlifting’ has been completed and he aims to hit the 900 lbs target next.

“The goal working with @jailhousestrong was to become the strongest ifbb pro in deadlifts in the world.

Now the goal is to accomplish a PR goal of 900lbs while continuing my bodybuilding career and competing later this year,” Joe Mackey wrote in the caption to his post.

Joe Mackey last competed at the 2021 Chicago Pro and finished 12th in the Open Pro division. Shortly after the competition, Mackey took to his Instagram and acknowledged the fact that he has fallen short of achieving the goals he set for himself and vowed to make significant improvements going forward in his career. Looking at some of his most recent Physique updates and fests of immense strength, Mackey seems to be on the correct path to take his career to that next level. Fitness Volt wishes him all the very best for a strong comeback in 2022.