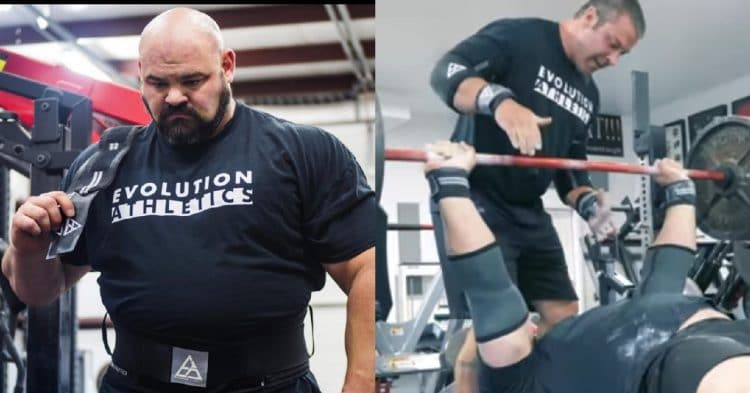 Multiple-time World’s Strongest Man Brian Shaw has his sights set on scoring a 701lb bench press. In the efforts to do this, he completely demolished a recent training session, proving that he is making serious progress to that goal.

As one of the most popular strongman athletes ever, this is some serious interest in seeing him attempt a 701lb bench press. Over the years he has shown some serious power behind that lift, and many people have faith that he will be able to reach his goal. Of course he has a ways to go, but he would appear to be doing all of the right work to make it happen.

Some of this hard training has been chronicled on Brian’s YouTube channel. The most recent instalment of his “Road to 701” series sees Brian Shaw completely tearing through a 520lb bench press double. It was a part of a larger training session, but the speed that he showed when whipping out those two reps was undeniable.

Take a look at the lift, starting around 5:15 in the video.

The speed of the bench press double makes it seem that Shaw is able to score these numbers easily. This was confirmed after the fact, when he reflected on the lift and commented on his light it felt.

“That was a joke. Honestly, that was a joke. That was so easy. We’ve got to bump the numbers up. I was way too pumped up for that. Numbers are going up baby, that’s all I’m saying!”

From there, Shaw moves on to some more high speed bench press supersets. The speed that he shows, between this and his previous work on the bench, shows that he is really improving on his strength overall. You can see that progress, even compared to this 315lb bench set, just a few days earlier.

All things considered, Brian Shaw is looking like he is well on his way to this 701lb lift attempt. Not only that, but with the World’s Strongest Man coming up, he will be starting his prep for that contest. So the next few weeks are sure to bring some insane progress from this strongman legend.