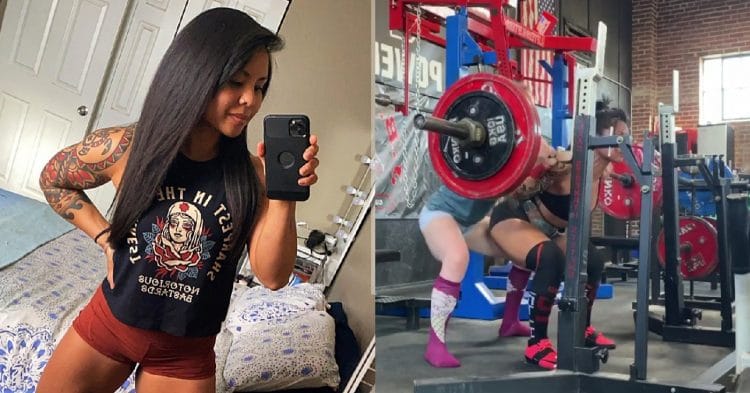 57kg powerlifter Christina Lazo has been working her way through the competitive ranks, and is working to establish herself as a top athlete. She showed that she is improving big time with some recent squat training.

Although she has not had the most impeccable career, the 32 year old Lazo has shown a constant ability to grow and improve. She has competed in ten meets over her four year long career. While she has yet to score a win at a major event, she has landed as high as 8th at the 2019 RAW Nationals, as well as 2nd at this year’s Arnold.

Something Christina Lazo has been recognized for is her steady improvement over her time as a competitor. This was on full display with a recent post to her Instagram. The pair of videos sees her hitting a wild 319lb squat, as well as a 209lb front squat, both for a strong five reps.

Christina explains that she had Hannah Massey as her spot for this session, but she clearly did not need her. Both of these sets moved easily, and at a consistent pace. It was a clinical effort that displayed how far she has come since the basically 358lb single that she hit earlier this year.

It would seem that Lazo really enjoys doing sets of five. Not just with her squats either. Here she is, a few days earlier, pulling 275 for five with a three second down time.

There is still a lot of room for Christina Lazo to grow and improve more than she already has. Nevertheless it seems that she is always working on herself, and fixing the areas that she is weaker in. It will be interesting to see how far she can take these improvements when it comes to her next competition.