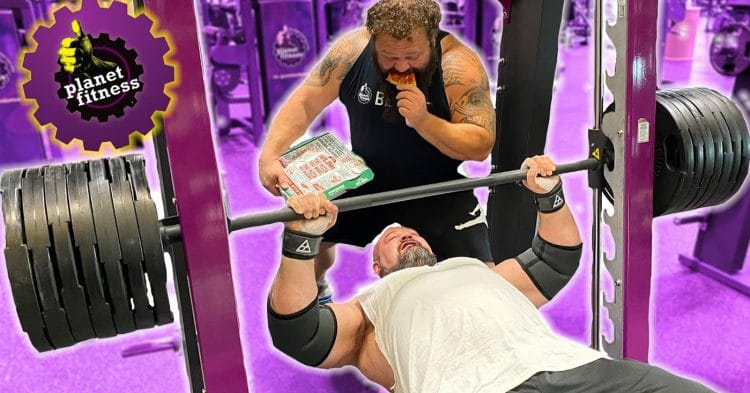 It has been almost two years since former World’s Strongest Man Brian Shaw got kicked out of Planet Fitness. Now he is back, with Robert Oberst, and looking to hit the heaviest bench press in Planet Fitness history.

The last time Shaw took to the massive gym chain Planet Fitness, he did so with a vengeance. He went with YouTuber Jujimufu, and the pair wrecked the entire facility, maxing out the weights on all the machines. However that all came crashing down, when they were kicked out by staff members who did not want them filming the session.

Well now Brian Shaw is back, and this time he brought along fellow strongman Robert Oberst. A recent video to his YouTube channel sees the pair head into the massive purple palace. They did so with one goal in mind.

“We were just driving around, and we were having a discussion,” Shaw explains. “And the discussion was: what is the heaviest bench press that’s ever been done at Planet Fitness?”

After a bit of a discussion, the pair agree that likely the heaviest weight that someone has benched at a Planet Fitness is likely 315lb. Of course, with the fact that these gyms do not allow actual bench pressing, the two will have to use a smith machine. Regardless, they plan to exceed those numbers, and go for the heaviest smith machine bench press in the gyms history.

“We’re going with 315, we’re going to beat that, that’s part of the warm up,” Shaw jokes. “We’re going to set a new heaviest bench press ever record, at Planet Fitness.”

With that out of the way, Brian Shaw and Robert Oberst got to work. As predicted, the pair easily coast through the 315lb warm up, all the while poking fun at the strict rules Planet Fitness employs. Both Brian and Robert are jokesters, and like always their chemistry is on fire, as Oberst gets a free pizza for being a new member of the gym. Finally, after a few rounds warming up, they go for the big 560lb smith machine press, which you can see at about 7:24 of the video below.

Following the lift, both Brian Shaw and Robert Oberst encourage anybody to try to best their “Planet Fitness record,” which has now been firmly set at a hefty 560lb. It is unclear how much this will help Brian reach his bench press goals, but it was still a fun and entertaining workout. At least they did not get kicked out this time.

This 4-Year Transformation Of Kiera Aston Will Blow You Away