The 'World's Fittest Woman' shows what she eats in a day to be able to maintain her physique, insane training sessions, and overall health. 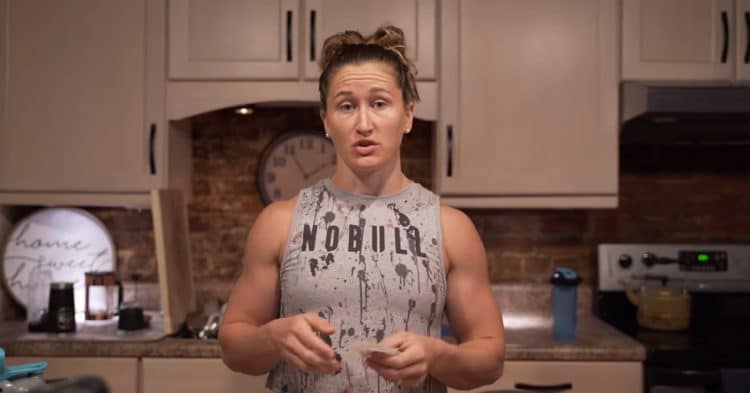 Australia’s Tia Clair-Toomey boasts the most number of CrossFit Games titles on the women’s side with three consecutive wins. She dominated in 2017, 2018, and 2019 to become ‘World’s Fittest Woman’ and many may wonder how she manages to do it.

While it’s obviously a combination of her elite work ethic, champion-caliber training, insane genetics, and passion for the sport, Toomey also follows a diet that allows her to perform as well as she does. So, she recently shared her full day of eating schedule on her YouTube channel.

Toomey explained that she starts her day with coffee and a book before preparing her breakfast. She needs lots of energy for her intense training sessions and therefore makes sure to get in enough fuel.

Related: Tia-Clair Toomey Shares The Insane Diet That Got Her 3 CrossFit Games Wins

Toomey has a pretty hefty breakfast that most people probably wouldn’t be able to finish, which includes…

Now, for most people, this breakfast would include way too many carbohydrates. But for Tia Clair-Toomey, there’s almost no such thing, considering the level that she trains and performs at. She even acknowledged this in this video…

“For me, I’m in about 30 minutes going to be training and exerting a lot of energy, and so I’m wanting a high-carb meal so that I have energy that’s going to withhold majority of my training session.”

She mentioned that the carbs make up about 430 calories and 100g carbs for breakfast.

Toomey takes her vitamins and other beneficial nutrients in supplement form, one of which includes Omega-3 tablets. Omega-3s are fatty acids that are essential for many aspects of health related to the heart, brain, immune system, cell membrane formation, and more.

She also takes a vitamin assortment from the company 1st Phorm called Micro Factor, which contains multivitamins, probiotics, antioxidants (disease-prevention), fruit, and veggies, and more. In addition, she makes sure to get in some zinc and CBD capsules called Revive from the company Beam.

Before Toomey takes any supplements though, she has two Goli gummies. These contain an equivalent of a shot of apple cider vinegar which evidence suggests may support blood sugar/diabetes, cholesterol, weight loss, and more.

Check out these top men’s and women’s multivitamins

Then its time for training and oftentimes, Toomey will have some fuel during her sessions…

“I can be at the guy for about 4, 5, 6 hours and so it’s very important that I’m fueling my body during training and afterwards“. “Things like this (protein and fruit smoothie pouch called Fuel For Fire), fruit, even a tiny little meal really help me get through my training session.”

The smoothie pouch is a convenient snack that she has between her training or anytime that she needs it. It contains 115 calories, 15g carbs, 10g protein, and 0g fat.

Toomey has a protein and carb shake at least 30-60 minutes after training to restore her lost nutrients from the intense session.

She uses 1 scoop of protein (Phormula-1 from 1st Phorm) in her favorite ‘Loop D Fruit’ flavor and 1 scoop of a carb supplement (Ignite from the same company).

Toomey mentioned that her goal for the day was 2,500 calories but she explained that she goes by how she feels when choosing whether to try and eat more or not.

For dinner, Toomey had a bowl from Chipotle that consists of chicken, white rice black beans, guacamole, salsa, cheese, and lettuce.

This was still a little under her daily calorie limit so she’ll enjoy a little dessert later during her tea time when she unwinds.

Toomey talked about how she once tried the ‘If it fits your macros‘ (IIFYM) approach. However, it didn’t last very long because she’d eat save up for the end of the day to eat a bunch of junk food. Well, it affected her training and although she didn’t want to give it up, she couldn’t do it any longer.

“Now I realize that by having salads or a lot of vegetables… having things that are very healthy and wholesome, I can have a lot of because it’s not a lot of calories and it fits incredible with my macros. That obviously allows me to feel like I’m eating a lot but really I’m not and I’m also ensuring that I’m having good nutrients“.

To unwind, Tia Clair-Toomey will have some tea of which she has a scoop of Dream. She’ll also have a protein bar to end the day.

Toomey broke down her total calories and macronutrients for everything she ate. She usually aims for 2,500 calories per day although she fell short by 474 calories this time. However, she wasn’t worried because she felt very satisfied and good all-around.

She explained that although she needs a lot of good fuel since she was leading into a competition, she doesn’t want to eat too much to where it disturbs her sleep.

Toomey mentioned that she uses an app to track her nutrition but she also communicates with her coach in Australia to ensure she gets the right amounts of the nutrition that she needs.

This macronutrient ratio was nearly spot on although she said there was a little gave and take throughout it. But the important thing was that she felt good about it which she believes is the most important thing.

“I’m overall happy especially with how I’m feeling. I keep saying that but for me, it’s so important and something I’ve learned over the years is you really need to listen to the body. Maybe you’ve been recommended that you need this, this, and this. But the body just isn’t responding well to it.

In my opinion and from my experiences, something needs to change because at the end of the day I just want to feel good, and in order to feel good, you need to listen to your body. Toomey says this applies to nutrition, exercise, and recovery.”

In closing, she mentioned that she likes to add some variety in her nutrition to prevent from getting bored. But at the same time, consistency is important here.

Tia Clair-Toomey recently won the Rogue Invitational on the women’s side and has expressed that she still wants to compete at the 2020 CrossFit Games despite the actions of former CEO and founder Greg Glassman. She felt what he did was not representative of the sport as a whole and wants to bring positivity to the sport and fans especially with the current health situation.

We’re definitely all hoping for more positivity and some light at the end of the tunnel in spite of all the recent and current events that are going on in the world.

Watch the full video of her full day of eating below…