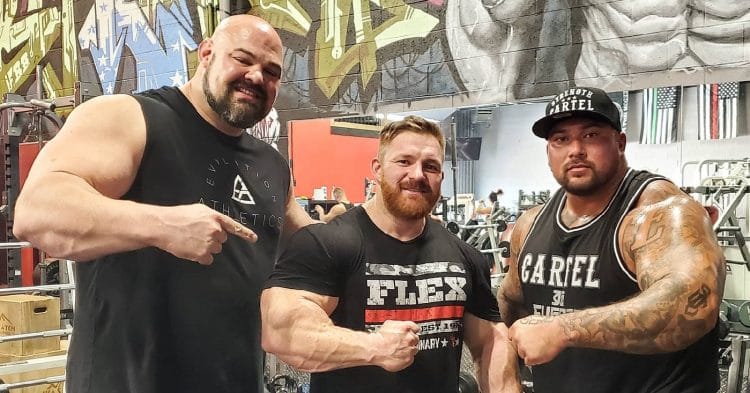 Former World’s Strongest Man Brian Shaw is a popular guy in the fitness world. This was perhaps most evident when a recent training session saw him working alongside a ton of different athletes.

Shaw has mad a name for himself with his skills, but also with his incredibly likable nature. Few people have anything negative to say about the strongman, oftentimes offering him praise. This is why he has the opportunity to train with some of the incredibly talented athletes that he has worked with over the year.

Recently Brian Shaw had a legendary training session at the Butler Pro Gym in Utah. A video posted to his YouTube sees the strongman primarily working with bodybuilding star Flex Lewis, as well as powerlifting star Big Boy Jake. However with the FitCon going down in Salt Lake City, there are a ton of other incredible athletes there while they worked out, resulting in a crazy training session.

Starting off, Shaw and his compatriots hit the tricep pulldowns. Here he runs into Olympia winner Dana Linn Bailey, who he jokes is hogging the machine as a line forms of people waiting for their sets. Then the two laugh as Brian tries to follow Dana’s lead by letting the weight pull him up when he finished the set, but he was hilariously too heavy to do so.

Next, Brian Shaw moves on to some hammer strength curls. The group comments that the large man may not be able to fit on the machine, but he was able to, albeit barely. Then Dana gets on after his set, getting to work on her own back.

“I just need to make my back look like that,” Shaw said while pointing at Dana’s back, “at 400+ pounds. That’s what needs to happen.”

After getting a lesson from Flex Lewis on how he does the hammer strength curls, he jumps on the machine. He proceeds to assist Shaw on his reps, showing him how to maximize the pump from this exercise. Big Boy jumps on for his own set, and they alternate a few rounds with this exercise.

When they are finally finished with the hammer strength curls, the trio moves on to some lat pulldowns. After this, Shaw ends the session by getting in some dumbbell curls, as Flex follows suit with some rotating curls. All in all, it was a pretty solid workout, and Brian loved the energy in the gym.

It is always fun to see athletes work out with people that are from different sports. However it is rare that people like Brian Shaw get to work with the likes of Flex Lewis, Big Boy, and Dana Linn Bailey. Not to mention, the other highly talented people who were there for this fun session.