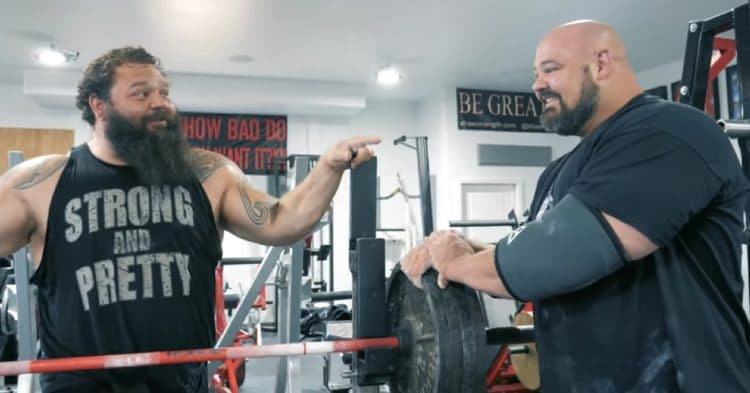 Strongman competitors Brian Shaw and Robert Oberst have been known to have a lot of fun while training together. However it was all business when they did the NFL Combine Bench Press test recently.

As far as strongman athlete are concerned, few are as popular as Shaw and Oberst. They have grown an intense following, not just because of their skills in competition, but also because of their entertaining personalities, which were seen on the History Channel. Both men have built a following of people who enjoy seeing them try various challenges for their YouTube channel.

It would seem they are back at it again, this time with a new challenge to try. A video that Brian Shaw posted to his YouTube sees him and Robert Oberst going head to head in a fun way. Just a day after setting the Planet Fitness bench press record, the pair thought it would be fun to have a go at the NFL Combine Bench Press test. This portion of the skills assessment that professional football players endure uses a 225lb bench press, measured for reps.

This was actually not the plan originally for this training session. In fact, they were doing some warm up sets when Oberst dropped the challenge on Shaw. They noted that this would not be the best performances they could have with this challenge, given the previous day’s heavy bench workout and the higher altitude missing with Rob. Nevertheless Brian, admittedly too competitive to let a challenge slide, agreed to see who could to better.

In the end, as the above video showed, Brian Shaw would end up with 44 reps after it was decided he was going to go first. Oberst, on the other hand, re-racked his weight after a solid 42 reps, leading to Brian proclaiming victory. It was a fun challenge, and interesting to see how these massive behemoths would do.

As impressive as this was for Brian Shaw and Robert Oberst, both men fell short of the NFL Combine record, which sits at 51 reps. However it does make you wonder how much better they could have done, given the time to prepare properly. It seems likely that they could blow that record out of the water.