Brian Shaw Improvises His Training, With A Crazy Uphill Truck Pull As Well As Other Unique Workouts For His WSM Prep 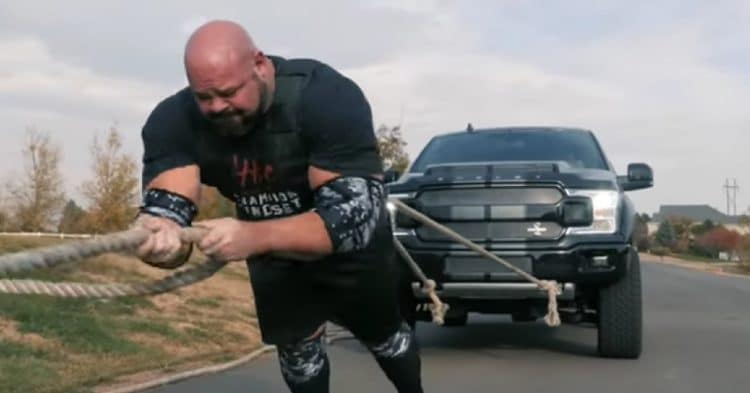 Running into some setbacks during his World’s Strongest Man prep, Brian Shaw had no choice but to improvise on his training. In doing so, his most recent session saw him doing an uphill truck pull with his Shelby F-150.

With the announcement that Hafthor Bjornsson was retiring from strongman competition, it seems like Shaw is a heavy favorite to win this year’s World’s Strongest Man contest. With just around three weeks to go until the contest, Brian has been prepping hard for the contest, looking to get his fifth WSM victory. In doing so, he has put together some incredible performances, reaffirming the sentiment that he has a solid chance of winning the event this year.

Unfortunately Brian Shaw recently reached a bump in the road for his prep for the 2020 World’s Strongest Man. As he explained in a recent video to his YouTube channel, the wildfires that are ravaging the west coast of the United States has forced him to evacuate his house, as well as his “Mountain Gym” due to safety precautions. Therefore he was left to do some improvising with his training and use equipment he otherwise wouldn’t.

The first part of the workout sees Shaw hitting some log presses, using a log that he had in storage because he did not like it. He explained that the log does not sit right during the clean portion of the lift, but that he is willing to work past it out of necessity. Not only that, but it was enough for him to get the proper workout and feel good afterwards.

From there Brian heads outside to do a truck pull, using his Shelby F-150 truck. Normally he does this with a fire truck but given the circumstances they were unavailable, so he decided to improvise. He did one set using a tank at full resistance, which was hooked to a Ram 2500 Megacab, which was then hooked to his truck. The second set was done for speed, using just the Shelby and the tank.

“We’re just trying to learn on the fly,” he said  “This is not something that I would recommend, but under the circumstances you’ve got to fight through it, you’ve got to make it happen.”

Next up on this session, Brian Shaw does some makeshift Hercules Hold training, using a row machine maxed out at the top, and a strap that is holding weight from across the room. He then concludes the session with some Atlas Stone movements using a machine that he can do reps on, without using actual stones. All in all, he says that this was a pretty good session given the circumstances.

Brian Shaw manages to show a stellar ability to improvise in less than ideal circumstances to still get training in. This may not be his normal idea of a training session for the World’s Strongest Man, but he still found a way to push himself anyway.