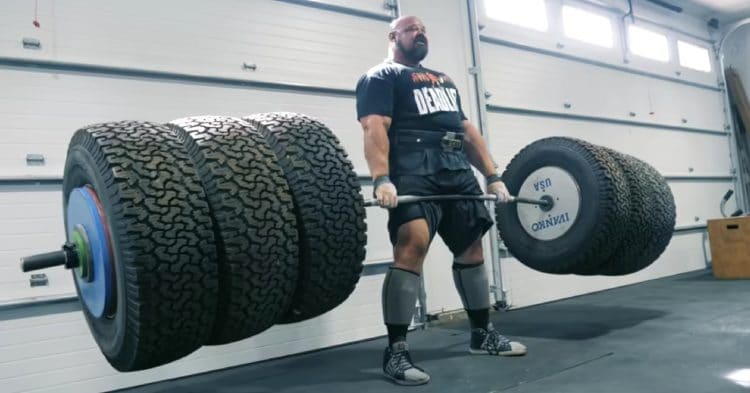 Brian Shaw has made it no secret that he is a big fan of the Hummer Tire Deadlift. Now that he has his own version of this set-up, he decided to show it off and put it to good use.

Easily one of the most iconic pieces of strongman imagery comes when an elite athlete is seen deadlifting several Hummer tires. Just the sight of the enormous barbell, with gigantic tires on either side is the stuff of legends, and something largely made famous by the Arnold Classic. It is a favorite event for many, both athletes and fans alike.

Someone who is a huge fan of the Hummer Tire Deadlift, is former World’s Strongest Man Brian Shaw. He decided to commission one to be built for his own personal use, and has even revealed that he will be including it in his upcoming Shaw Classic inaugural event. Ahead of this contest, and in preparation for the World’s Strongest Man contest, Brian decided to post a video to YouTube, demonstrating his setup, which apparently cost him in the neighborhood of $10,000. Not only that, but he decided to put these tools to the test.

“I’m very excited because we’re pulling out the Hummer Tire Deadlift set. This is what we’re going to pull on today. I’ve been working on various heights with my deadlift. Still don’t know what the deadlifts will be at the World’s Strongest Man, what height, or if it’s for max or it’s for reps. But I’m trying to work on everything to be well rounded, and as soon as I get that official information I can dial it in a little more. The other reason I wanted to pull out this deadlift set be is because this is a deadlift we are going to do at the Shaw Classic in December. To be fair, why wouldn’t you want to pull on a Hummer Tire Deadlift set?”

With his intro out of the way, Shaw got to work. The first set saw him taking things easy, only doing two tires on the deadlift, but going for three reps. From there he increased the weight incrementally, doing a set with plates, then adding two more tires, adding some plates, and so on until he had all six tires on the bar. Then, because this was not enough weight, he finished off the workout with six tires and a red and blue plate on each side.

Following the training session, Brian Shaw explained that the concrete floor he was doing the deadlifts on, was actually making the tires grip to the ground a bit, causing a bit of difficulty while pulling the weight. This is something he will have to adjust for, by the time the Shaw Classic comes along this winter. Nevertheless, he was able to move some serious weight, all while looking as cool as can be.