Life and accomplishments of Simeon Panda 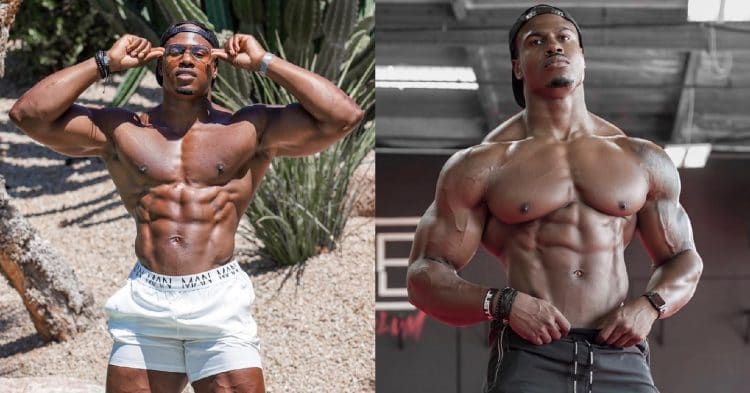 Simeon Panda is a bodybuilder and fitness influencer from England. He was named one of the world’s top ten fitness influencers by Forbes and has over 7 million Instagram followers. This is his complete profile, biography, training regimen, diet plan, and more.

Simeon Panda was born and raised in London, England.

He has four brothers and one sister. He began training at age 16 as a skinny teen but really found his love for fitness in college after he met a friend that was muscular and in great shape. During this time he purchased a weight set and was determined to build an amazing physique. Little did he know that a few years later, he’d be a world-famous fitness superstar.

It certainly helped that he had elite genetics to take him there though as he quickly saw progress and many of his peers took notice too. He explained that a friend of his brother’s made a comment about how good he was looking and that only motivated him to keep going.

But he didn’t care about genetics back then and didn’t realize that he was in the top percentile because there was no Facebook or Instagram back then so he never compared himself to anyone.

“Not having a clue about how my genetics would play in my training was a positive for me.”

It also helped that he trained at home so he wasn’t paying as much attention to other physiques, and this also allowed him to learn what worked best for home without relying on copying what others were doing.

“I had no goal physique“.

Panda has been training for more than 19 years and is a prime example of how hard work and consistency can build an incredible physique.

Simeon Panda has competed in various Musclemania competitions, winning the European Championship in 2013, which earned him Musclemania Pro status.

Panda uploads weekly workout videos to his social media with all sorts of useful information for getting in shape, regardless of experience level. But we provided a few of his workouts below.

Here’s a recent leg workout that he did with Mike Rashid.

How does Simeon Panda build his massive chest? He shared his tips, tricks, and chest routine of which we’ve provided the details below.

“I would not have built the physique that I have today without knowing my anatomy“.

Before his bench press sets, Panda warms up his rotator cuff with a set of the standing dumbbell external rotation (link shows lying version) which he explains is very important for preventing injuries during presses.

He then does a set with just the barbell not only to warm up the chest and prevent injury, but it’s also to activate the nervous system, find his ideal form, and establish the optimal movement pattern so that he can effectively add weight to the bar and perform efficiently.

Panda likes flys to isolate the chest and take the shoulders out of the movement as much as possible. His biggest tip for flys is to bend the elbows which will maximally stretch the chest and also take stress off the shoulders. He advises not to touch the weight at the top as this relieves tension (not what you want), and you also want to bring your arms to near full extension only at the top and squeeze the chest before bending the elbows for the negatives.

His best piece of advice for building a big chest using dips is to lean into the movement, as opposed to remaining more upright which will work more of the triceps.

Panda has lots of tips for cable flys. He says that many make the mistake of using a pronated or overhand grip. But it’s not a pressing exercising, therefore, a neutral grip is better for this exercise. This also opens up the chest a lot more to allow for a deeper stretch in the muscles.

His other tip is to use a split stance which allows you to have better balance and generate sufficient force to effectively perform the fly through its full range of motion. You should also be standing directly in the center between the cable pulleys and not closer to one side as this will throw off the movement.

For this exercise, Panda recommends actually crossing the hands instead of just touching them together. This increases muscle contraction which is a key component of muscle growth. His big tip for this exercise is to start with a neutral grip as he previously explained but then as you cross your hands, you want to turn your palms down for an even more pronounced contraction. You also want to alternate crossing your hands one over the other.

“I train because I love training. I enjoy the act of lifting so that has been the reason why I’ve been able to be consistent at it.”

Panda eats 5 times per day, varying his meals, but what does he eat to stay shredded year-round? He likes rice and mackerel, salmon, and other foods too, but we’ve provided details for a salad recipe that he eats twice per day and it looks delicious.

Panda used to not care much for salads until he learned about all of the different ingredient and flavor combinations that are possible. And he’s very adamant about having a salad that is flavorful, has lots of texture, and that tastes good with perfectly cooked chicken that’s not dry. Therefore, he puts together his own salads.

He also doesn’t add much salt to his food either especially if he’s using other seasonings that contain salt, as to not overdo it. He also includes a lot of protein to ensure his meals are protein-heavy.

Panda will also sometimes add a few different ingredients (e.g., shrimp, apples) but this is a typical salad that he has several times per week. He also follows a low-carb diet but sometimes he’ll add quinoa to this salad as well if he wants extra carbs.

Want to know what Simeon Panda eats for breakfast? It’s a rather simple recipe.

Panda offers online training and is the owner of Just Lift, an online fitness apparel brand, and is sponsored by Inno Supps. He also hosts seminars around the world, including Olympia weekend, and has written for and been featured in various high-profile fitness magazines such as Muscle & Fitness, MuscleMag, Muscle-Insider, Muscle & Performance, and others as well.

He’s also very active on social media with more than 13 million followers across all platforms, making him one of the most popular fitness influencers in the world.

In 2014, he joined Lita Lewis for an interview on New York’s popular urban radio station “Hot 97”.

Panda is currently dating Chanel Brown, a former model, fitness figure, and blogger, who he met in 2012. They’ve been named fittest couple by several publications.

Simeon Panda has reached the pinnacle of success in the fitness industry. He has a massive following around the world, is a huge inspiration to many, and is one of the hardest workers, hence his amazing achievements. But it’s not all about him, as Panda is very active in helping others to achieve their goals, and also providing some of the best content available.

The fact that he has amassed the following that he has speaks volumes about his impact on the industry and he remains one of the most sought-after fitness influencers in the world.