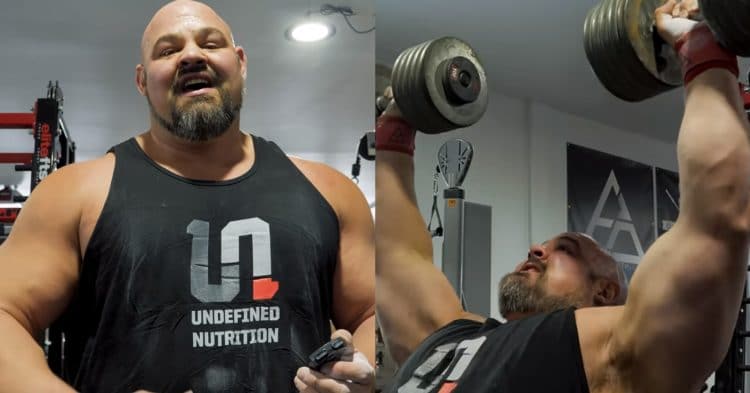 Four-Time World’s Strongest Man Brian Shaw recently shared what his high-volume training session looks like as he kicked off the preparation for 2022 World’s Strongest Man. Shaw will attempt to improve on his runner-up finish and earn the record fifth WSM title in 2022. Shaw’s attempt to win the inaugural Strongman contest at the 2021 Rogue Invitational failed due to an unfortunate hamstring injury but the 40-year-old got an A2M treatment back in November to get back in action.

Heading into 2022, Brian Shaw has made some changes to his preparation and got 2015 NFL Strength & Conditioning Coach of the Year, Joe Kenn on board as his strength coach. Shaw revealed that he worked with Kenn at the very beginning of his career and attributed a lot of his success in strongman sports to things learned from him. Brian Shaw shared the programming session on his YouTube channel as he started the contest prep for 2022 World’s Strongest Man. The workout consisted of supersets and medleys of arm workouts with very short rest periods between the sets.

Brian Shaw started the workout with 4 sets each of the following three movements:

Every set consisted of 25 reps and the purpose of the workout was to get the blood flowing for the high-volume arms workout that followed.

Each set consisted of 15 reps. Shaw went through the workout with moderate weights since the purpose of the workout was to build a massive volume base going forward for the 2022 World’s Strongest Man.

Brian Shaw then proceeded to perform a medley of arm workouts that consisted of six different isolation exercises that included:

Brian Shaw wrapped up the day with four rounds of the medley in which each set consisted of 15 reps. Towards the end of the video, Shaw admitted that the high-volume workouts did not conform to his usual training methods.

“This volume has definitely been kicking my butt. I’m… a little bit not used to that. It’s taken me outside of my comfort zone here a little bit. But sometimes when you want to get better, you need to go outside of your comfort zone.”

While speaking about his association with Joe Kenn, Brian Shaw stated that Kenn has brought a new perspective to identify weak points in Brian Shaw’s game.

“He kind of set me on the right path. I’ve done my program in training pretty much through my entire career and it’s kind of coming full circle back to where he is bringing his knowledge and he is bringing a different eye into my training and helping me to identify weak points – areas that I need to improve and I’m very, very thankful for that,” Brian Shaw stated.