Bud Jeffries Performs a 2000lbs Back Lift For 13 Reps! 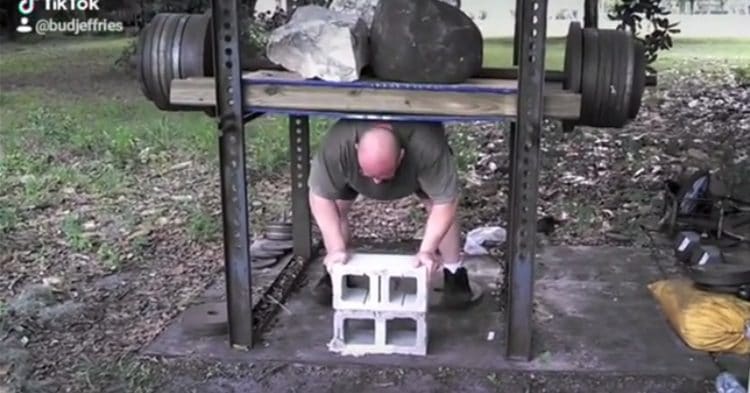 Strongman has come a long way from the days of Arthur Saxon and Eugen Sandow. While modern-day Strongman organizations like WSM or Arnold Classic like to play the line between sport and spectacle with their events they are ever slowly moving toward more sports-oriented events.  Of course, the more knowledgable Strongman aficionados will note that just last year Arnold Classic last year introduced Wheel of Pain as a stable event-which is pure spectacle. I am also sure that there are many recent examples of organizations putting on events that are more spectacle than sport. But… I have yet to see a promoter set up an old-time feat of strength like the back lift.

Which brings us to Bud Jeffries, an old-time feat of strength performer and very strong dude. Budd isn’t as known to the public as the modern-day social media and Strongman titans such as Brian Shaw or Eddie Hall but reading into his bio you will find that he is just as deserving of the social media clout as the two mentioned above. According to announcementoflife.com  he has written 8 books, produced over 30 DVD series, and several audio products, won 2 state, 2 regional, 1 national and 1 world championship in Drug-Free Powerlifting, set over 30 records including 2 world records and several national/American records.

Now that’s an impressive list of achievements! Regardless of his many impressive life feats, he is best known to the modern-day audience as the big man on Instagram that lifts very heavy things in very specific ways. He does everything and anything you can imagine….from doing jump squats with a 200lbs giants ass stone all the way to  his most recent incredible lift, the +2000lbs back lift for reps.

I know most of you are like; “yeah this is cool and all, but Shaw just bench pressed 500lbs for reps”… I know it lacks the visual aesthetics of modern days Strongman training and performing but this is pretty damn amazing. Also, this is a very legit lift! Old school Strongman did stuff like this all the time. They would put a bunch of people on a platform and evenly distribute the weight then drop down under the platform and lift it up either for a few inches or lift and hold the platform with the entire audience looking with awe. The closest thing I could find to a backlift being performed in modern-day Strongman competition was this clip of Derek Poundstone performing a similar lift back in 2009