The 'Beast' Eddie Hall shows what he does to get physically fitter which will help him in his boxing match against Hafthor Bjornsson. 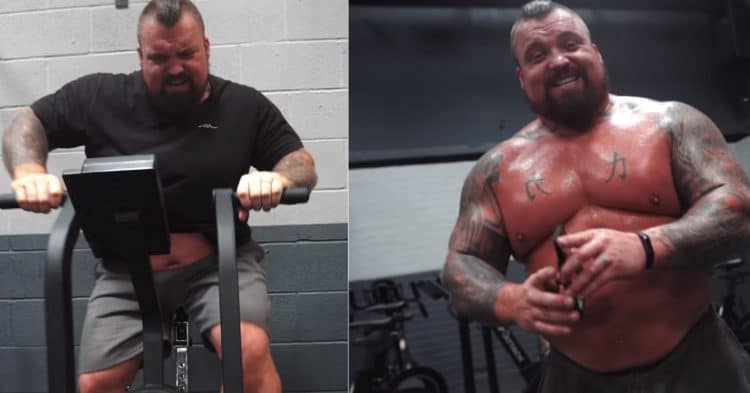 If you’ve been keeping up with Strongman events, then you’d know about the current World’s Ultimate Strongman Feats of Strength series where top strength athletes have been attempting world record lifts every weekend.

The 2020 Arnold Strongman Classic champion Hafthor Bjornsson started things off by breaking Eddie Hall’s 500kg/1102lb deadlift world record by one kg (501kg). Afterward, the former challenged the latter to a boxing match that had already been discussed as a possibility a while back. But prior to the new world record, they had already gotten into it over the fact that the record wouldn’t be attempted in real competition due to the current health crisis.

So things started to heat up even more and now they want to take each other’s heads off in a boxing match confirmed for late next year. Well, both have also been showing off their skills and are focused on getting in the best shape possible to have a chance at shutting the other one up for good.

Also check out: Eddie Hall Demands Gyms Be Reopened In The UK!

So in a recent video posted to his YouTube channel, the 2017 World’s Strongest Man champion showed how he’s getting fitter to prepare for the match.

Hall was at a gym called Elite Fitness for this session with a partner (Brian) and the plan was to do some active recovery (rest day) to work on his overall fitness. The workout involved a 32-minute HIIT session done in a one minute on, one minute off fashion.

His goal was to get his heart rate up to 160-170 for one minute, and then drop it down to 140-130 for the next minute. “Were keeping the heart rate above the aerobic threshold, so we’re benefitting with these 32 minutes, the cardiovascular will improve, the heart and lungs,” he explained.

So they chose 8 exercises for this session and did two rounds.

The eight exercises in the workout were kettlebell swings, prowlers or sled push, Watt bike, Ski Erg, punching bag w/ baseball bat aka bat slams, burpees, rowers (machine), and battle ropes. Hall did the exercises exactly in this order while Brian started with the battle ropes.

They made some headway steamrolling through the exercises and then before burpees, Hall stopped to show his heart rate and you could tell he definitely wasn’t looking forward to the next exercise but he had to keep pushing through.

After the workout, Hall said that he was only able to log 24 minutes of the workout as the heart rate monitor wouldn’t sync until 8 minutes in. But it was still good enough and he explained that his average heart rate was 151 beats per minute and his max was 166bpm.

He also mentioned that his heart rate was highest after the burpees which he was surprised with due to the slower pace of the burpees compared to the other exercises.

Then Hall proceeded to kick his partner’s shoe that was left in the rower across the gym followed by stealing the bat and hitting him in the arm with it and trying to shove it in his backside (never a shortage of fun and entertainment with Eddie Hall).

To end, he pretty much explained how this session was effective for aiding in recovery and he was happy with it overall. It’ll definitely be interesting to see both Hall and Bjornsson’s level of fitness when they meet up in the ring.

How To Master The Bar Muscle Up