The Captain Marvel star hasn't worked out in a while but she decided to call up her trainer Jason Walsh to hopefully get back into the groove. 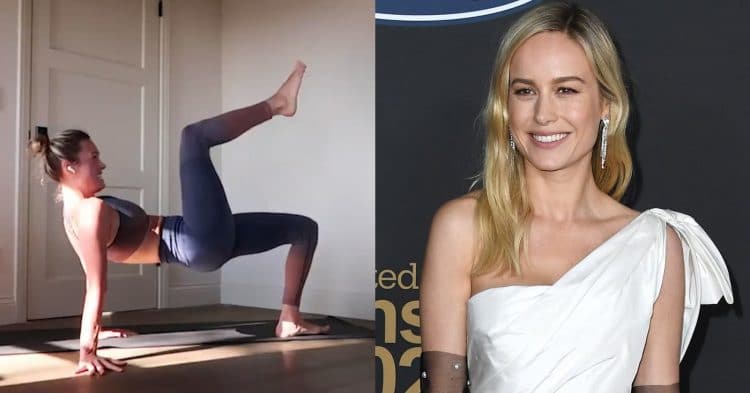 Many of us have admittedly slacked off in our training due to the unfortunate COVID-19 situation, especially when gyms closed months ago. Sure, working out at home is an option but it can be limiting and sometimes even unmotivating for a lot of people.

There’s nothing wrong with taking a little time off as long as you don’t make this a habit. Recently, Captain Marvel actor Brie Larson admitted to not having worked out since the beginning of the quarantine. But, of course, she figured it was probably time to change that.

So, she got with her trainer (also her trainer for Captain Marvel) Jason Walsh, who put together a workout for her and they shared it for all to see.

They shared a split screen on video chat and Walsh talked a little about the workout while Larson enjoyed a cookie.

“This is a just a reintroduction, I want to wake the body up,” he explained. “We’re going to go through movements, we’re going to exploit these movements and slow the tempo down you do need weights.”

The plan was just to get the body moving to re-establish certain movements and nervous system patterns, turn on the muscles, etc.

“It’s been a while, so I want to take it easy on myself, be realistic about where I’m coming from, and enjoy it while my mind flips out,” she added.

So now it was time to do a little warming up and it was apparent that Larson wasn’t exactly thrilled. Although the cookie and the fact that she said she was on her period probably didn’t help.

Who else records their first workout in months and puts it on YouTube?

So this warm up involved getting into a sumo stance with the feet wide and upper legs about parallel to the floor. Walsh explained that by shifting side to side similar to how the Cossack squat is performed (not exactly the same) while keeping the butt back and arms back, you’re able to fire up all muscles involved including the back. This was done at a slow tempo.

Although at one point, Larson asked if doing it faster would get it over with faster. But that wasn’t possible with this exercise. It was obvious she needed to get back into the groove as her coordination and balance was a bit off which is expected.

From the same position, they did Sumo stance squats. The instruction for this exercise was to raise the arms overhead and perform squats by imagining pushing through the heels as if you were spreading the floor apart. The butt should also be back like with the previous exercise so that the torso is not vertical.

This exercise involved being in the bottom of a squat position with the butt low to the ground. The feet should be pushing out to pretend as if spreading the floor apart while the knees should also be pointed outward. Then, one arm is extended overhead before turning to one side and reaching back, alternating arms for a few reps on each side.

For this warm-up movement, the legs are first extended while lying on your side, and then the feet are plantarflexed and dorsiflexed. Next, the knees are brought to the chest before rolling on the back to the other side. Repeat the plantar and dorisflexion, pull the knees back to the chest and then roll back and forth.

That was just the warm-up, now its time for the actual workout. Larson didn’t look too thrilled as she lied in the previous warm-up position. Walsh definitely seemed to be getting a kick out of it though.

Nothing looked easy about this next exercise which was the body saw. For this exercise, you’re in the plank position, and then you walk your feet all the way back and forward without touching the ground.

There’s also a few variations of the body saw, one of which involved sliding your feet back and forth rather than walking forward and back like with this variation.

Plank with knee to elbow

In the plank position, one knee is lifted toward the same elbow and this is done in alternating fashion for a few reps. Each knee to elbow should be held for two seconds or so.

This next exercise was a little more challenging. In the plank position with feet spread a little wider, lift one arm off the ground. Extend that arm, place the palm on the ground and push yourself up while placing the other hand on the ground. You should be in the push-up position.

Upward dog to push back

This exercise is similar to the dive-bomber (or maybe it’s the same thing) where you start on all fours with the butt lifted high. Dip your body low while moving forward and up, ending in with the torso upright and back slightly hyperextended.

“I could feel my mortality in a way that I haven’t in a while,” Larson explained regarding the difficulty.

Pike to half moon extension

From the pike position, one leg is raised in the air and moved side to side in a half moon position. The butt should be tense during each rep.

On your back, keep the feet together arms out in the crucifix position and then lift the butt high off the ground and back down for reps.

Plank to reach through

This one is done in the plank position and then alternatively lower the hips down to the floor.

Push-up to sit through

Do one push-up, move one foot forward and place it on the ground near one hand, Then, the other leg moves forward and is extended out in front of the body. Move that leg back through to the starting, push-up position.

This is a lateral lunge that involves crossing one leg behind the other into the lunge and alternating legs.

This was probably the most difficult exercise that involves squatting one leg while the other is lifted behind the body. Then, the rear leg is moved under and in front and held parallel to the floor.

They finished up with the single-leg toe touch to forward to reverse lunge, lateral skate jumps, squat jumps, and a little cool down that involved stretching. And that was a wrap!

What was supposed to be a short workout turned out to be a much longer session but it was definitely what Brie Larson needed to keep herself on track and not be tempted to take extended periods off from training. Not to mention, it likely burned off that cookie she ate as her pre-workout.

Watch the workout below and feel free to do it…

Bud Jeffries Performs a 2000lbs Back Lift For 13 Reps!