Calories Burned on a Trampoline Calculator

Jumping on a trampoline can be a fun activity while also burning a significant amount of calories. Find out how many calories you’ll actually burn while on a trampoline. 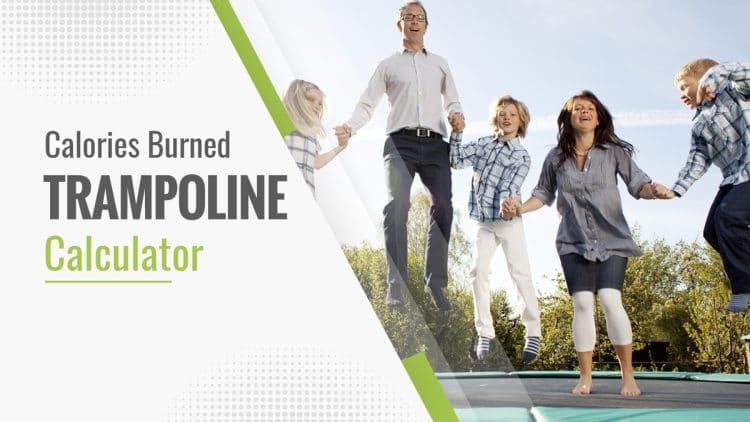 Since you are constantly jumping up and down on the trampoline and maneuvering your body in different directions, jumping on a trampoline allows you to burn a significant amount of calories while still having fun with your friends and family members.

The number of calories that you burn will depend on a number of factors, including your height, weight, and amount of time spent on the trampoline.

How to Use The Calculator

Using the trampoline calculator is very simple. To calculate how many calories you are burning from jumping on the trampoline, just input your weight and the time that you’ve spent or plan to be on the trampoline for. Then simply select the type of activity that you plan to perform and then hit “CALCULATE“.

You will now see the approximate calories burned boxing.

How The Calculator Works

Our trampoline calorie calculator uses MET (metabolic equivalent of task) values to find out the number of calories that jumping on a trampoline will burn. This value is determined as set by a convention of 3.5 mL of oxygen per kilogram of body weight each minute while using a trampoline [1].

Using MET to find out your body’s energy expenditure is what our trampoline calorie calculator is used for. The MET value is the number that determines the energy that it takes to perform various activities, such as jumping on a trampoline. This is the ratio that shows the relationship between your active metabolic rate to the resting metabolic rate.

The formula that our trampoline calorie calculator uses to determine the number of calories burned per minute is (MET  x  bodyweight in Kg  x  3.5) ÷ 200.

An individual weighing 160 pounds will burn approximately 267 calories every hour while jumping on a trampoline. Using a trampoline for recreational purposes has a MET of 3.5 which means that it burns 3.5 times as many calories as your RMR.

This is what the formula for calculating the calories burned while using a trampoline for recreational purposes will look like:

What is a Trampoline?

A trampoline is a product that uses coiled springs and a strong fabric that is stretched between a steel frame. The fabric that is used is called taut and is a durable material that allows trampolines to be used in good condition for a long time and in all different types of weather.

Trampoline-like devices have been used dating back to the Inuit peoples of the Arctic regions of Greenland [2]. The Inuit’s would play a game where they would toss blanket dancers into the air on walrus skin during a celebration that took place for whale harvesting.

The first modern trampolines emerged in 1936 when George Nissen and Larry Griswold created a trampoline in an effort to train tumblers and trapeze artists to enhance their performances [3]. The first trampolines for commercial use were created by Nissen and Griswold due to the increase in popularity of their early trampoline devices.

Since the first modern trampolines were produced in the early 1940s, trampoline production has increased dramatically and there is a myriad of variations of the trampoline that can be used for recreational purposes as well as in competitive events.

Trampolines have also been widely used in flight and astronaut training during World War II in the United States Navy Flight School [4]. Trampolines were used to train pilots and navigators for the different types of forces that they may encounter while flying airplanes and other vehicles.

Competitive trampolining started in 1964 with the Trampoline World Championships in London. Since the inception of the Trampoline World Championships, the sport has expanded into gymnastics and became part of the Olympic Games since the 2000 Summer Olympics. Athletes perform somersaults and twists, using the trampoline to bounce to heights of over 30 ft high.

The Rise in Trampoline Parks

Commercial trampoline parks are becoming more and more popular and are marketed as a fun way to get exercise while jumping on trampolines. Some of these parks are indoors with many different types of trampolines available for customers to use.

These types of parks started to become popular in the late 1950s. However, due to the high rate of accidents that took place, these parks started to decline in popularity as the interest from the public began to fade [5].

Since 2001, indoor trampoline parks have seen a major resurgence, with many different franchises establishing operations centered around using trampolines. Many of these parks are geared toward children, but adults still enjoy these trampoline parks nonetheless.

Most popular commercial trampoline parks are located indoors and have wall-to-wall trampolines which prevent people from falling onto hard surfaces. There are also padded walls to prevent impact injuries at the trampoline facility. However, even with all of these precautions, there have been many serious injuries reported at trampoline parks, and even deaths.

Additionally, since there are typically very few safety precautions implemented for trampolines that are used in private homes, many more injuries have occurred outside of commercial trampoline parks. This has become such a problem in many areas in the United States that certain medical organizations have pushed to ban trampolines for private use [8].

Using a trampoline for exercise can be a great way to burn calories while also having fun with friends and family. Using our trampoline activity calorie calculator will give you a realistic idea of how many calories you can expect to burn while using a trampoline.

Be sure to check out all of our other activity calculators at FitnessVolt.com!

Push-up Board — How To Use, Benefits, and Workouts