Guinness World Record oldest gymnast Johanna Quaas turned 95 this year and celebrated with a flip and a handstand for a cheering crowd. 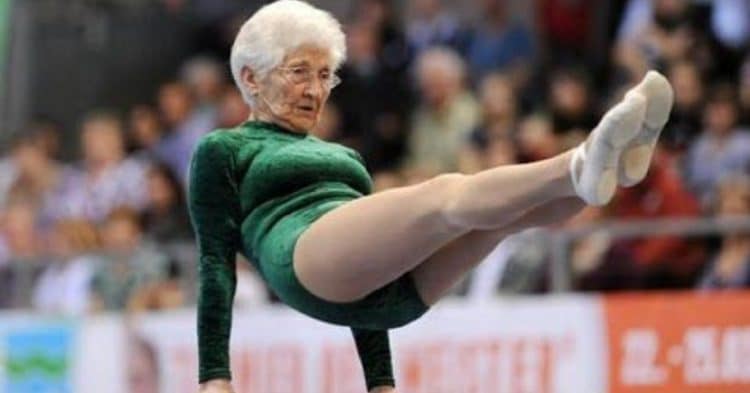 The word inspiring just doesn’t seem to cut it. This is what many are feeling when they watch 95-year-old Johanna Quaas perform a gymnastics routine in a video that has now gone viral.

Hailing from Hohenmolsen, Germany, this nonagenarian also holds the Guinness Book of World Records title for Oldest Gymnast. To prove she’s still got the chops, she recently performed a gymnastic routine and the video made it to Twitter, and all around the world.

Here she is, working the parallel bars to an inspired crowd wearing her signature green color. She performs a gymnastics routine that includes a handstand, a flip, and some parallel bar moves. As you watch you can see the concentration and motivation pushing her with every inch of her moves.

Meet the oldest gymnast in the world — Johanna Quaas.

She lives in Germany and turned 95 this year.

Age is only a number…pic.twitter.com/wNEVQeFDni

Johanna Quaas was born in 1925 and began her gymnastics career at the age of nine. Her competition career began in 1934.

In 1945, Johanna had finished gymnastics coach training. But after World War II, the Allied Control Council had banned gymnastics and Johanna took up handball.

It wouldn’t be until 1947 when the ban was removed, and Johanna’s true love of gymnastics returned. By 1950, she would later train gymnastics coaches and co-author a gymnastics textbook. She would coach through the 1960s, and spent her life with the parallel bars.

When social media began to hit the mainstream world, she would use YouTube to show off her training skills, even at the age of 86. It was September 13, 2012, when she became the titleholder for the Guinness Book of World Records.

She’s held the title ever since.

What does she think of that? In the web archives for Guinness, she is found saying,

“It is a great feeling to be in the Guinness World Records book. I really love it that special and extreme people are being recognized. I hope my record inspires others to realize it’s never too late to try something new.”

When she turned 91, she proved she still has it when it comes to competitions. Not many 90-year-olds that like gymnastics are in the competition ring. But for Johanna, that is how you get a Guinness Book of World Records title.

The Ultimate Powerlifting Guide For Beginners

Hiromu Inada may be approaching his 90's, but he is not letting this age define him. He proved this in...

Before people were stuck at home being forced to do push-ups instead of going to the gym, Jarrad Young was...

Kathleen Krause is a German strongwoman known best for her truck pulling abilities. However, she got to earn a spot...

George Hood is not your average 62 year old man. This veteran of the United States Marines recently found his...

"I can do all things through God who strengthens me. - Philippians 4:13" It may be just a Bible verse...