After wearing a cast for a few months, Cedric McMillan has gotten surgery to repair his broken hand 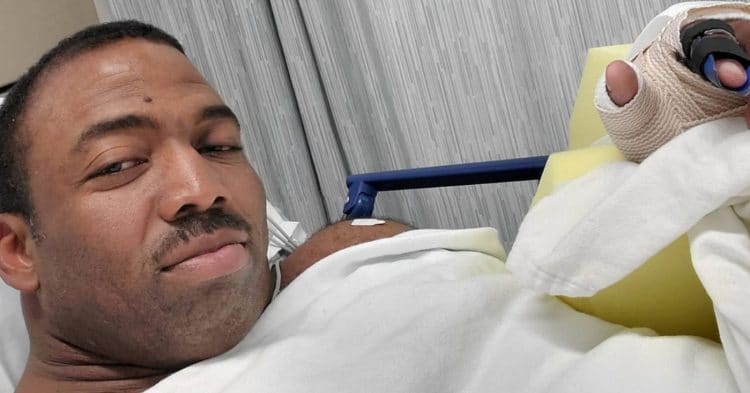 The last several months have seen bodybuilder and U.S. Arm Staff Sergeant Cedric McMillan dealing with a broken hand. Now he has gotten surgery to fix his mitt, and is looking to get back to training soon.

Anybody who knows McMillan knows just how tough of a man he really is. That has been on full display recently, as he has been dealing with this nagging hand injury, which ultimately forced his withdrawal from the 2020 Mr. Olympia.

Not only did Cedric break his hand while training, which was bad enough, but he needed to get pins in his hand, and wear a cast all the way down his forearm. Of course, because he is who he is, that did not stop him from training, even with the cast.

Now it seems that Cedric McMillan was back at the hospital, this time in need of surgery. He did not go into in-depth detail on what exactly the procedure was, but he did go under the knife to get more work on his hand.

Posting to his Instagram, Cedric gave an update after the procedure. He was hanging out in the hospital after surgery, clearly under the aide of some heavy duty painkillers, which is something he is not used to.

“They got my s—t done,” he added, gesturing to his hand. “My finger’s still f—ked up, but I’m ready to get back to normal.”

It is actually quite entertaining to see McMillan under the influence of painkillers, clearly out of his mind. He even wants to score himself a Whopper from Burger King, as well as a milkshake.

All jokes aside, it is good to see that he is on the right track towards getting back to fully training  His presence was missed at the Olympia last year, and it was disappointing to see him forced on the sidelines.

While it did not completely stop him from training, McMillan was nowhere near his full training capacity. One can only hope that this procedure will get him back on the right path, so he can return to his normal training.

Cedric McMillan is one of those athletes that has a solid fanbase and commands a ton of respect from the bodybuilding community. It has been disappointing for his fans to not see him on stage, and with this procedure they are looking to see him rest and heal up, so he can return soon.