Cedric McMillan provides an injury update, gets a cast on his arm, and confirms that he will not compete at the 2020 Mr. Olympia 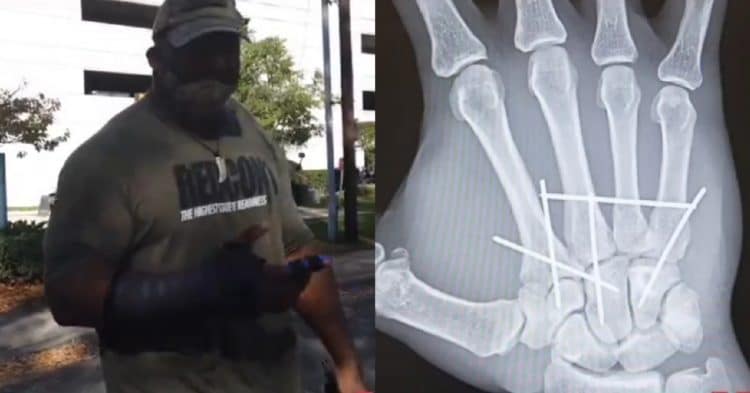 If you know anything about Cedric McMillan, it is that he is an extremely hard working and naturally talented athlete, as well as a Staff Sergeant in the U.S. Army. Sure, it would be easy to point out bodybuilders who have accomplished more in the sport, but he has done inexplicably well for someone who only trains and competes part time. That is why it is always exciting to see him compete, even if it is not as often as some would like.

Unfortunately it appears that it will be next year before we see McMillan on stage again. A couple weeks back, it was reported that his 2020 Olympia hopes were in jeopardy, after he suffered a broken hand and collarbone. After getting surgery on the injuries, he has been able to confirm that he will not compete at this year’s Mr. Olympia. He took to Instagram to document the process of his post-op check-up, which resulted in him getting a cast on his arm.

As he approaches the hospital, McMillan shows off his busted hand, including his index finger that does not open all the way. He then goes back to review some x-rays, where the medical professionals show him the five pins that are going through his hand, which are essentially keeping his fingers attached to his wrist. Then he reveals that he will need to get put in a cast because he was not wearing the splint on his hand like he was supposed to.

“I came in to get my hand checked and the nurse that was in there the first day to look at my hand before the surgery, she fussed at me a whole lot because I don’t have my splint on,” McMillan explained. “From my understanding, the doctor told me I don’t have to keep the splint on, but she really wants me to keep the splint on. So now I’m in trouble. We got the x-rays, everything’s good but now I’m on punishment so I’m grounded. What grounded means is that I’ve got to get a cast, now to hold everything together and make sure everything heals properly.”

After that, Cedric McMillan is seen walking out of the hospital sporting his new arm cast and joking about decorating it to look like the Infinity Gauntlet. That being said, being in a cast will prevent him from working out that arm, and cause atrophy thus making his ability to compete impossible. Hopefully he will heal up quickly and be able to get back to competing soon.